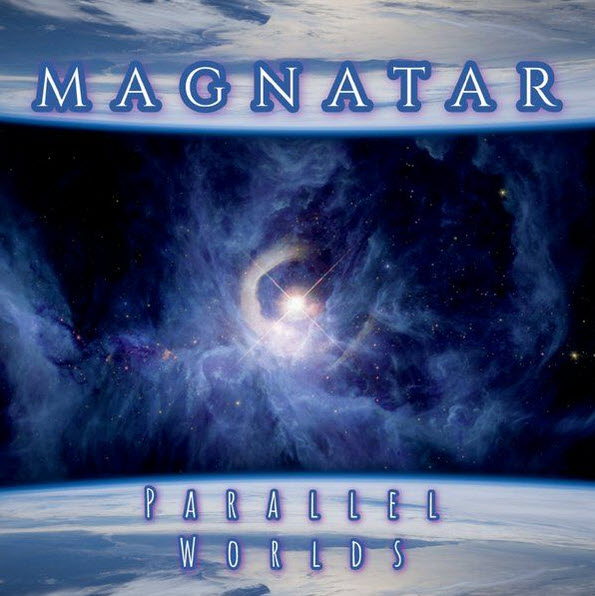 Having been a mandolin player since I was around fifteen years old and having written about half a dozen songs on it, I’ve always wanted to hear a band that made good use of the instrument in a rock setting. Mandolin is standard fare in bluegrass, country, jazz, folk and classical, but the rock bands that have used it as a basic core instrument can be counted on one hand (Horslips, FM, The Hooters… are there any others?) and even in those cases it’s usually a violin player doubling on it. So needless to say I was optimistically interested when I heard about Magnatar, a five-piece based in DeLand, Florida, where the main composer in the group (Glenn Smith) is also a full-time mandolin player. On Parallel Worlds, their debut album, they are fully intrumental and squarely operating in the classic progressive rock style. The other band members are keyboardist Dave Norton, guitarist Ryan Rivas, bassist Joey Costa, and drummer Reed Hayes. I don’t think that one needs to hear more than the album’s opening title track to understand that one of their major influences is Yes, back in those early days of The Yes Album and Fragile. Costa’s arsenal of Rickenbacker basses, and Rivas’ Steve Howe-like attack underscore this at various points throughout the album, and Smith’s compositions for the most part reflect this as well. There are notable differences as well, and the choice to create an album like this without any vocals is primary among them, as well as the front-and-center mandolin. Most songs are between five and eight minutes, steering clear of excessive length, though nonetheless sharing similar compositional complexities that any prog fan should appreciate. Only a couple of the album’s nine tracks were not written by Smith, the first would be the beautiful keyboard piece “Solara” written by Norton, which acts as an extended intro to the Smith penned track “New Galaxy” that follows it. “A Walk in the Park” written by Rivas, which is the album’s most unplugged piece, featuring an opening nylon string and steel string duet, moving onto some beautiful solos and elaborations over its five minute duration, with hand percussion in lieu of a standard drum kit. Very nice indeed. Magnatar is a very promising band to be this cohesive on their debut, and I look forward to the second helping.