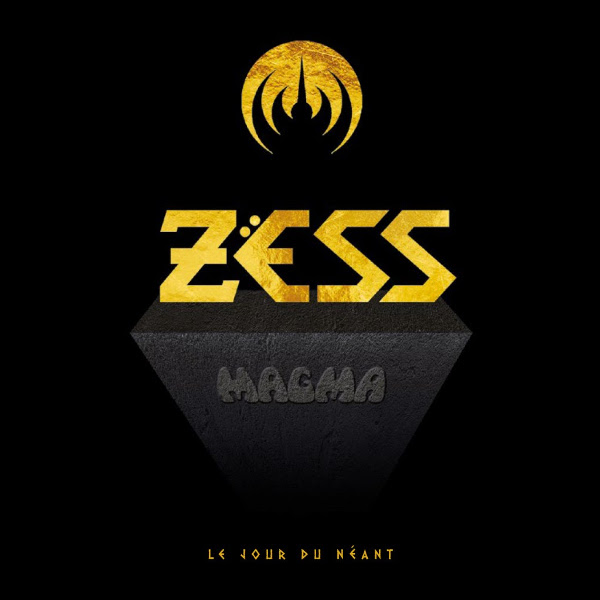 Zëss. Hardcore Magma fans will be familiar with it through two previous official releases: First, there is the Bobino Concert 1981 CD (released in 1995) where we get a 30-minute excerpt of it as it was at that point in time, then again on the release “Les Voix” Concert 1992 Douarnenez for a 17-minute mostly vocal version (as part of a suite with “Ëmëntëht-Ré” and “C’est pour Nous”) featuring nine singers, piano, and drums. Apparently the first draft of the piece is from 1977, hatched during the sessions for Attahk, but not to be heard on any releases from that time (even unofficial live recordings.) So finally here we have in 2019 the definitive studio version of Zëss, being somewhere in between what we have heard on those two previous versions. Interestingly, Christian Vander chose not play his drums on this one, instead concentrating on the lead vocals along with eight additional singers in the chorus (including Stella, who also sings some lead vocal parts), while turning the drum kit over to the very capable Morgan Ågren. Other players include Simon Goubert on piano, Philippe Bussonnet on bass, and Rudy Blas on guitars, while all of the additional orchestrations (arranged by Rémi Dumoutin) are provided by the City of Prague Philharmonic Orchestra directed by Adam Klemens. The orchestra provides a powerful presence behind the band and the choir, just what the two previous recordings could have used; here the whole dynamic is enlarged by the orchestra’s presence, with complex arrangements that suit the piece perfectly, as it alternates between choral lead and solo voice, the players in the band pretty much holding down the paced rhythms while strings and horns take care of the melodic aspects. Listening to this new version is akin to revisiting those original versions with a more superlative and passionate realization. The earlier versions were fine, but this absolutely feels like the definitive version, now clocking in at 38 minutes. The piece is divided into seven parts, but there are no stops for the duration. Add to this some excellent and thoughtful liner notes regarding the piece, its evolution and meaning by Bruno Heuze (in both French and English) plus photos, lyrics, and translated lyrics (Kobaïan, French, and English) all housed in a 42-page CD sized hardbound book. This definitive version of Zëss has certainly been worth the wait.