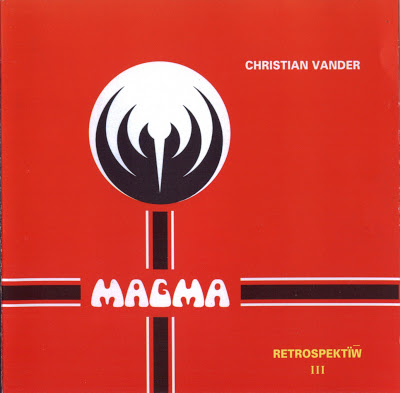 In June of 1980, various Magma alumni gathered in Paris for a series of reunion concerts. The two Retrospektïw albums that resulted present some of the best performances from those shows, covering several of Magma's classic pieces and live favorites. Retrospektïw III contains three tracks, two of them previously unreleased. "Retrovision" is an 18 minute extravaganza featuring Bernard Paganotti's thick bass, an energetic guitar solo from Jean-Luc Chevalier, and a healthy dose of the gospel-influenced vocal style originated on Attahk. Compositionally it comes from a similar musical mold as the material on Üdü Wüdü, and even briefly quotes a section from "De Futura." The version of "Hhaï" found here is the longest one on record, clocking in at over 13 minutes. It's highlight is a blistering, back-and-forth violin / synthesizer duel showing off the soloing chops of Didier Lockwood and Benoit Widemann. The closing track is the short and beautiful "La Dawotsin," a solo electric piano / voice piece performed by Vander.