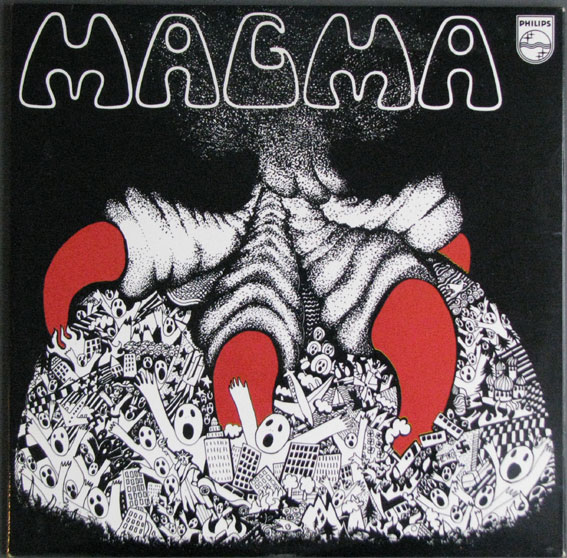 Magma's earliest incarnation found its musical roots in the experimental electric jazz scene of the late 60s. Their debut double album, featuring a lineup of keyboards, guitar, bass, and drums, augmented by a trio of horn players, straddles the fuzzy line between progressive jazz-tinged rock and the exploratory jazz of the day. While it is at times reminiscent of Soft Machine or early Chicago, and at other times suggestive of Sun Ra or McCoy Tyner, this recording stakes out some relatively unique musical ground, which on ensuing albums will be expoited to incredible ends. Though Christian Vander's compositional peak was still several years away, both his skill and direction are quite evident here. The jazz element of the music manifests itself less through overt improvisation, despite the jazz background of the band, and more through the increased harmonic vocabulary and timbral variety Vander draws upon in his pieces. Hints of the voice-as-instrument concept, which grew to such prominence in later works, can be found here, along with the first examples of Klaus Blasquiz's manic high-pitched screaming fits. One of Vander's real strengths as a composer is his ability to poignantly portray the emotional contours of the lyrics or the story with his music. On Magma he effectively captures the different experiences of Kobaïa's founders, mingling ominous and aggressive pieces with more hopeful and ethereal atmospheres. The structural elements Vander uses to convey these emotions, combined with the indecipherable Kobaian lyrics, give the music of Magma the characteristic other-worldly feel which came to define the zeuhl sound.