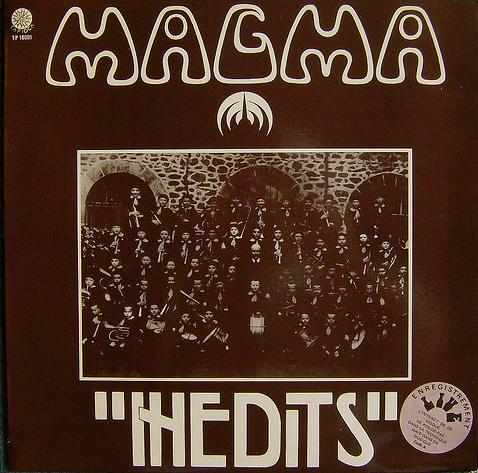 The last of the original Magma albums to be reissued, Inédits comes without much fanfare — it was after all, something of a bootleg in its day, produced by some slippery little label that somehow got the rights to some live tapes. It contains some excellent live outtakes from 1972-75, many by lineups that are otherwise unrepresented on other albums, and in fact the material is not available (live or studio) on any of the other records either. Please see Rob Walker's review of Inédits for more details. If one recalls, when we interviewed Christian Vander, there was some hope that better tapes could be found of these same performances, but apparently that has never come to pass. So we are left with a CD that has all the hiss and the same bootleggy sound quality of the original LP, without any bonus material. If the performances herein weren't so outstanding and unique, it might be easy to overlook this one, but in fact this is a must-have for any fan of Magma, and gives some special insight into their live shows from the early years.

Released in 1977, Inédits contains live excerpts from six unreleased pieces, recorded over several years during the early to mid 70s. The recordings capture some of the Magma lineups not represented on the studio albums, and the edits tend to focus on the solo or instrumental sections of the pieces. The first two tracks, from 1974, feature some heavy fuzz bass jamming from Jannik Top, as well as a Claude Olmos guitar solo. The middle two tracks also hail from 1974/75, and highlight the electric piano; BenoÎt Widemann's nimble soloing on "Om Zanka," and the funky Rhodes riffing of Gerard Bikialko and Micky Grailler along with another Claude Olmos solo on "Gamma." The final two tracks present some earlier material; an avant-garde sounding excerpt from the 1001 Centigrades era, and a very "MDK"-ish snippet from the 1973 Mekanïk Kommandöh lineup. It's a shame one can't hear the full pieces these tracks were extracted from, but this is still an extremely interesting and strong collection of live material.