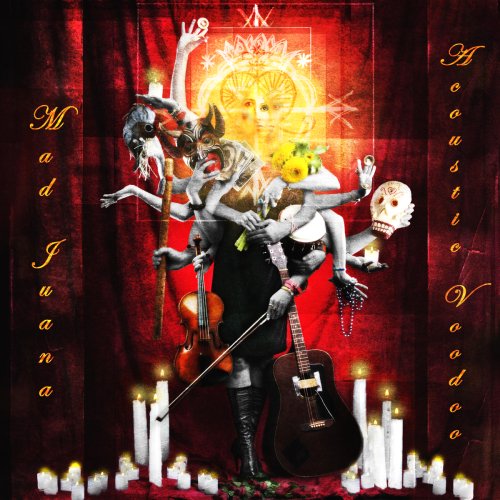 I was going to say, “Here’s one out of left field” but that’s unfair. Mad Juana comes from somewhere outside the ballpark entirely, from some dark, candle-lit back-alley fortune teller’s den, where the smell of incense and who-knows-what tells you that boundaries are illusions and reality may not be what you think it is. Like a number of other groups (Charming Hostess, Barbez, and Luminescent Orchestrii come to mind), they mix punk-informed rock with influences from around the world, be they gypsy, Balkan, or whatever. Mad Juana’s particular mix includes some Spanish flavor and more than a little spooky Cajun vibe – not the bouncy sound of Zydeco, more the slow blues of the bayou. And like those other bands, mad Juana features a charismatic female singer, in this case Karmen Guy, a sort of cross-cultural Patti Smith. As the title implies, instrumentation is essentially acoustic, though that does not lead to any shortage of drive or energy. Between Tony Mann’s congas and the mad strumming of Sami Yaffa’s guitar, there’s plenty of propulsive power. Accordion, viola, trumpet, and saxes fill out the sound with a small-scale cinematic esthetic akin to Ennio Morricone’s more offbeat work. And it’s all catchy as hell. Check out their reworking of “Venus in Furs” – included in three alternate versions in addition to the album track.