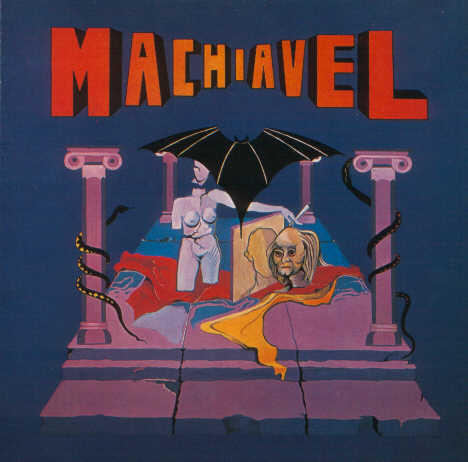 Here, finally, is the long awaited reissue of the first album by this renowned Belgian symphonic-rock band, who would go on to release two more excellent albums (Jester, Mechanical Moonbeams) before a rapid slide to a very commercial sound. At the time of the first album, Machiavel was a four piece of guitars, keys, bass and drums – with drummer Marc Ysaye handling lead vocals (full-time vocalist Mario Guccio had not yet joined the band). The sound is keyboard dominated (keys provided by Albert Letecheur, who also had a hand in writing most of the tracks on the album proper), a style very lush and atmospheric, strongly influenced by the Genesis school, and possibly some Supertramp as well, but more moody and a bit more classically oriented, original enough to not elicit constant comparison to other bands of the time (but a few bands who were to come along later – most notably Taurus, and more recently Differences – seem to have been strongly influenced by the sound of early Machiavel).

The guitars, acoustic and electric, are handled capably by Jack Roskam, and generally not prominent until solo time. Bassist Roland De Greef adds a nice cello solo on one track. The compositions vary from longer tracks in the eight-minute-plus range, lengthy story pieces with plenty of changes, to a couple shorter tracks with a more song-like structure, and one minute-and-a-half guitar track penned by Roskam. Ysaye's voice is tempered, suited perfectly for this music, not too out-front, yet powerful enough to handle the emotional peaks within some of the longer tracks. The three CD bonus tracks are all shorter pieces in the three minute range from two years earlier, and bear some resemblance to the rest of the album, mostly due to Ysaye's voice. In all this is a good reissue worth seeking out.