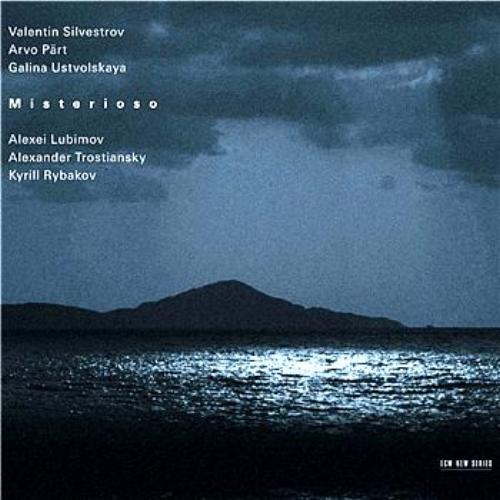 As part of ECM's continuing new music series, enter a semi-classical trio who embrace the quietudes of modern compositional expression with a keen sense of space and beauty by focusing on modern Russian based composers. Alexei Lubimov's piano playing drives much of the duet and trio performances with both his melodic and rhythmic abilities across the nine pieces. His sensitive reading of composer Alexei Silvestrov's "Post Scriptum" excels in the "Allegro" section, purposefully withdraws in the "Andantino" section and ends pensively in the final "Allegro Vivace, Con Moto" part. Lubimov displays a foundational approached needed to anchor Kyril Rybakov's solo clarinet performance by Arvo Pärt. Pärt's music is well known in the classical realm for his mastery of large ensemble arrangements to render poignant sweeping themes and a somber but graceful delivery. In this context the sparse arrangement gives way to a different kind of openness instilled with dense mystery and tension. On the lighter side, Utvolskaya's pieces have a childlike sense of playfulness and resolution which the trio easily embraces in the first "Espressivo" opening part. The countermelodies played in the "Dolce" section are a bit obtuse by plan, thus creating a natural discomfort but retaining a careful structure. The nineteen minute "Sonata for Violin and Piano" closes the disc with both Lubimov and Trostiansky leveraging individual skill with favorable adaptation delivering an amicable ending. Overall the trio clearly demonstrates mastery and purpose in performance of the composer's material.