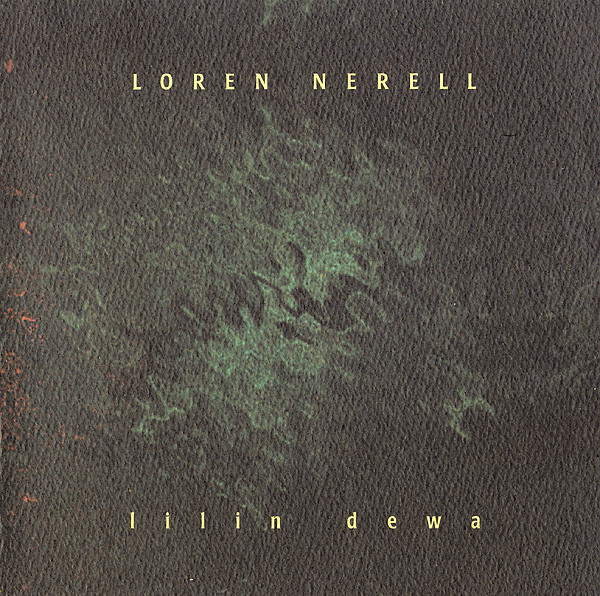 Here is a composer who has been busy working to put Indonesia on the map as the next landing point in the trek in search of inspiration. In his music Loren Nerell has always shown the explorer spirit, and Lilin Dewa reflects the fruits of his study of ancient and rare forms of Balinese gamelan. This he uses as source material to create ethnic-drone hybrid material that you could safely say has precedence in Brian Eno's seminal On Land. Reference points to the techno-tribal or Berlin-style space music directions taken on his previous cassettes (not to mention other influences such as Harry Partch) are scant, if existent at all, on this (his third) release. Far and away the standout track for me was the evocatively titled, "Bamboo, Iron, Resin, Bronze," with its simple but very effective hints at gamelan. Such a beautiful blending of authentic instrumentation flanked by a synthetic layering — you wish it would go on much longer. "Hiasan" is a sedate meditation constructed around motives played on the kempul (a row of highly vibrant, tuned Javanese gongs). If their resonance seems to beckon one to the imperial courts of Jogyakarta, then the Roach-like drone of "Galungan" bids one to stay and soak in the ceremonial atmosphere the work evinces. Voices and flute creep into the menacing admixture ever so subtly. The ambient drone supporting "Borubudur" is based around field recordings made near the Borobudur temple in Java. It is the next best thing to being there I'm sure, but given its fifteen-minute length you might wish for the intrusion of some more prominent instrumentation. The CD closes there, however, leaving us to ponder what may follow. That this one-time Djam Karet collaborator has few peers in the subgenre lends a sense of limitlessness which I hope Loren will exploit further in the future.