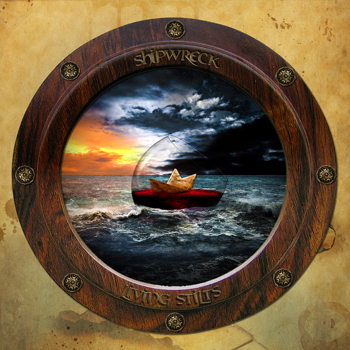 Living Stilts is yet another project band built around a keyboard player, in this case Italian composer Luca Mavilla. For his debut release, Mavilla went the concept album route, spinning a tale literally taken from the album title. Individual songs move the plot and characters along with the compositions tailored to support the narrative. The closest comparison I can draw is Clive Nolan’s recent theatrical albums She and Alchemy. On that score Shipwreck works, with some effective storytelling and enough drama to make the 14 tracks (which include segments featuring sound effects and recorded dialog) a suitable page-turner. Musically the album is hit or miss. Like Nolan, Mavilla employs male and female singers (Antonio Bella and Maria Tomasello) to relate his character’s stories. The female parts are lovely though Bella might rub some the wrong way. His English is noticeably accented and when the songs rock he sounds like Pendragon’s Nick Barrett but without the feisty English spirit. It’s also here that the album falls flat, with songs like “A Dicer’s Oath” failing the toughness test badly. The better tracks, like “Vertical Memories” and “The Traveler,” tap into late-60s/mid-70s Pink Floyd to create effective sonic dramas. As a musician Mavilla is impressive, demonstrating his skills at faithfully recreating various instruments on his keyboards (I could swear electric guitar is featured though none is credited). For a debut Shipwreck shows promise. As long as Mavilla plays to his strengths future efforts will certainly be worth a listen.