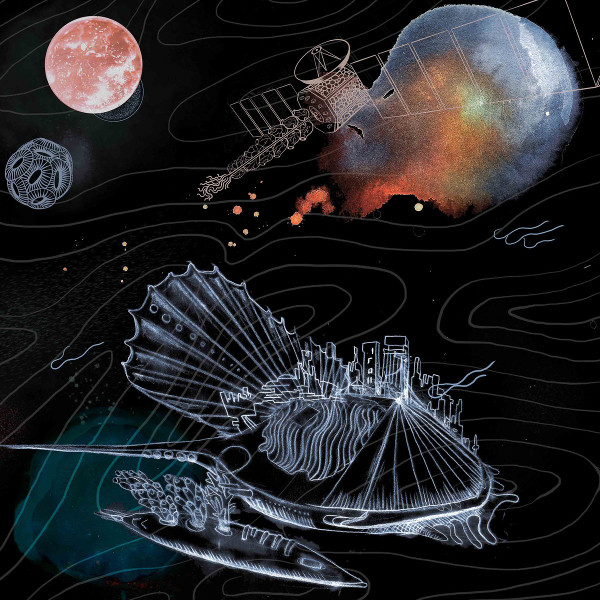 In the incredibly fertile Lyon avant-prog scene, it seems that every band shares members with every other band — maybe not completely true, but close enough. The three members of PoiL seem to be particularly profligate with their talents, though to be honest, that well seems to be bottomless, and no matter how many bands they play in, there’s always creativity to spare. All three — Antoine Arnera (keyboards), Boris Cassone (bass), and Guilhem Meier (drums) — are involved in Le Gran Sbam, along with two vocalists, Marie Nachury and Jessica Martin Maresco, and Mélissa Acchiardi, who plays vibraphone and percussion. Arnera and Cassone are the composers, and the rhythmic complexity that PoiL is known for is here in ample degrees, augmented by the powerful singing of the two women, so there’s a feeling a little like Magma with less reliance on repeated patterns and more emphasis on quick-paced changes. Ideas are tossed out, kicked around a bit, then abandoned as new ideas come along. Moments of crashing heaviness with distorted bass are contrasted with floating space-outs with electronic noises and whispered voices. It’s an endless parade of invention, mind-boggling in its agility and range, able to leap tall buildings in a single bound and shoot lasers from its eyes. You will find no hints of verses, choruses, or bridges in this music. Every track is a journey of continuous change, with a few recurring motifs to act as signposts, though the destination is always uncertain. Revel in that uncertainty, fasten your seatbelts, and hang on for dear life.

Le Grand Sbam is a French chamber rock band from Lyon. They are a passionate collective dedicated to music creation, research, and experimentation. Propelled by eminent musicians: Mélissa Acchiardi (AKA Acchiourdiou) of Hidden People and Very Big Toubifri Orchestra on vibraphone and percussion; Antoine Arnera (AKA L’Arbitre) of PinioL, PoiL, and Gwyn Wurst on keyboards; Boris Cassone (AKA Herr Bassone) of PinioL and PoiL on bass; Jessica Martin Maresco of Icsis and Pili Coit on lead vocals; Guilhem Meier (AKA El Glouton) of PinioL, PoiL, Lfant, and Icsis on drums; and Marie Nachury of Brice et Sa Pute and Monstre on lead vocals. Vaisseau Monde or Vessel World is their first release. Clocking in at 38 minutes, the five tracks are in the 6 to 12 minute range. The music ranges from raucous, precise, percussive zeuhl to calm ambience with odd electronics. This is tightly composed and controlled intelligent music. This music demands attention. If you enjoy Rock in Opposition bands, the Le Grand Sbam and Vaisseau Monde is a perfect addition to your music collection.

Various Artists - Lost Years in Labyrinth II – Unlike volume one, there is no theme governing this one other than the fact that all the groups record for Belle Antique. They have intended it as a sort of beginner's guide. All the songs are...  (1996) » Read more

Larry Kucharz - Pastels – Lights out. Put your headphones on for this one! Expansive sheets of subtle melodic color and points of sparkling light and empty darkness drift and float in and out of a three-dimensional listening...  (2010) » Read more

Iona - Heaven's Bright Sun - Live – Iona have lately been receiving a lot of attention from the prog community, particularly due to their association with such luminaries as Robert Fripp and Rick Wakeman. But that is not to say that...  (1997) » Read more

Tangle Edge - Tarka – Always of interest, the Norwegian trio Tangle Edge has been around for quite a while now putting out great instrumental rock. Tarka is a worthy comeback from a band we haven't heard anything...  (1998) » Read more