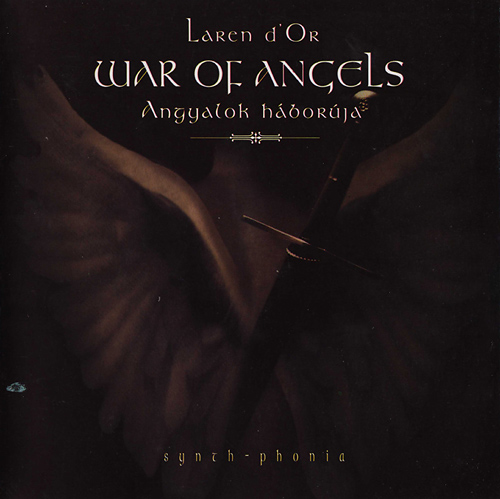 The same veiled (an under-promoted!) Hungarian label that is teasing us with Talizman, and After Crying, now goes to the other side for a symphonic keyboard recording by Laren d'Or. A solo project? Most likely, as there is no group roster to refer to. The Euros are going big guns over stuff like this, due to the vast popularity of Vangelis and Jean-Michel Jarre. And while the former's status is justified, Jarre is iffy at best for me, barring his excellent debut, Les Chants Magnetiques. What I find particularly frustrating is when a guy like that attracts hordes of followers who don't realize that the genre he came from sports a wealth of vastly superior work by artists they have no interest in hearing. Anyway Laren d'Or stands head and shoulders above any commercial projects I can think of. War of Angels features a variety of all instrumental dramatic and cinematic moods in an electro-symphonic mode that would work perfectly as soundtrack material. Though I was honestly not expecting to like this, the CD kept me engaged throughout, mainly because of the clever use of an unusual assortment of sound textures. For example, one piece began as a Kraftwerkian pastiche, but transformed itself into something completely different. Last issue's Olyam release may be a proper reference point for this CD, but Laren is much less predictable, insofar as he will readily jump from a simple melodic passage, to a more classical/romantic Enid-like territory; nowhere near as slick as of others of this ilk. This is the greatest charm of Laren d'Or's work in my opinion. How much better though if it were a whole band playing? That might not be bad advice for him to follow. The way it stands, non-converts would have to really be in the mood for something like War of Angels, but that isn't necessarily criticism. [Contact: Stereo KFT, Bartok Bela ut 59, 1114 Budapest, Hungary. Tel/Fax: (361) 166 9674]