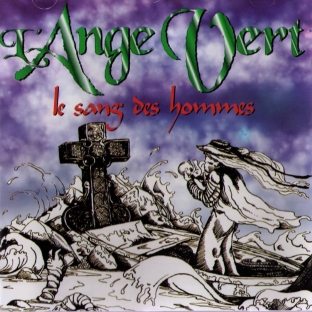 Remember a while back, when I reviewed Tempest's Turn of the Wheel, and I lamented the fact that there weren't more bands like that out there? Well, now there's this. After hearing the opening tune, "Marins de Cœur et de Fortune," I thought they might be the sort of band that would appear at your local Irish brewpub, apart from the singing in French. Then the electric guitars kick in. French they may be, but their heart is in Ireland. Their rockified Celtic folk is a sort of bridge from bands more on the rock side of the equation (e.g.– Horslips) to more traditionalist acoustic groups. Unlike Malicorne, they draw on Celtic traditions than on medieval Gallic music, more like Ys or Alain Stivell (though unlike Stivell, but like Ys, French is the dominant sung language). As with Tempest, keyboards are secondary to the other instrumentation (lots of violin, mandolin, various guitars, flute, bombarde, etc.). It's quite a varied album; one song can be more or less traditionalist, while the next more rock than folk. Sometimes they try a bit too hard, and it can get annoying at times (as on "Tavarn" or the keyboard bit of "Les Yeux du Naufrage" with the hip-hop-like beat). But their heart's in the right place, and overall this is a more than satisfying folk-rock blend. Fans of Horslips, Tempest, Steeleye Span et al are encouraged to try it.