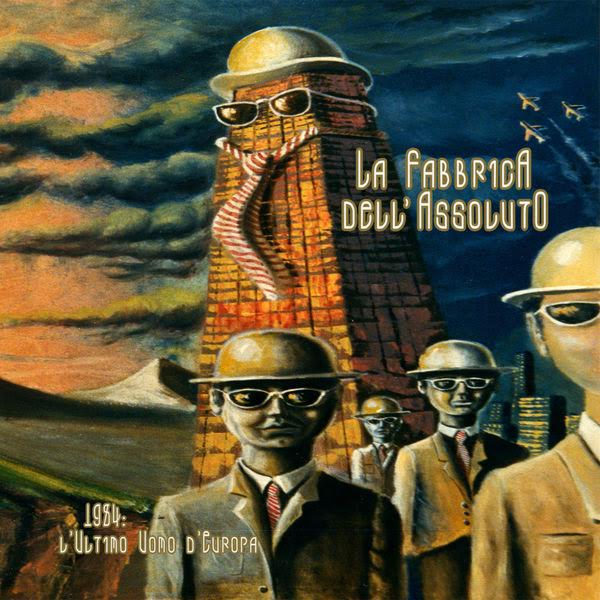 1984: L'Ultimo Uomo d’Europa is an Orwellian rock opera composed and performed by the new Italian progressive band La Fabbrica dell’Assoluto. Quite an undertaking for the debut release from a band that only formed in 2013! Michele Ricciardi (drums and percussion), Marco Piloni (bass), Daniele Sopranzi (guitars), Daniele Fuligni (keyboards, synths, organ, Mellotron, piano), and Claudio Cassio (lead vocals) came together in Rome with a passion for 70s Italian prog that they leveraged with their individual musical training and different viewpoints to create a heavy progressive set of tracks they began recording in 2014 and completed in 2015. If you are a fan of Museo Rosenbach or the first Il Tempio delle Clessidre album, you will be enamored with 1984: L'Ultimo Uomo d’Europa. Cassio is an emotive vocalist and quite often sounds like Lupo Galifi and Fuligni’s keyboard chops are outstanding whether he plays piano, organ, or Mellotron. Overall the disc has a dark, gothic vibe, but the music is uneven as some of the tracks are a bit difficult for me to embrace. The tracks that I find interesting are “O’Brian” with its analog synths, Mellotron, bass, piano, and wordless singing; the experimental “Bispensiero” with the demonic whispers and an outré vibe that is quite similar to Pink Floyd’s experiments on “A Saucerful of Secrets;” “L'Occhio del Teleschermo” sounding a bit like Le Orme’s Felona and Serona on speed; the mostly instrumental “Giulia;” the 12 minute “Processo di Omologazione: a) Il Risveglio b) La Tortura c) 2+2=5” that goes through many changes from crazed playing to 70s gothic Italian prog to soaring guitar solos; the beautiful church organ and vocals of “La Stanza 101;” the cinematic “La Canzone del Castagno” with reverbed guitar and Mellotron; and the experimental “Amava il Grande Fratello” that closes the album. In addition, this is one of those CDs where the final song is much shorter than shown, ending with a hidden track. This track is basically ambient room sounds including rattling dishes, TV / radio broadcast, pouring and drinking coffee, lighting and smoking a cigarette segueing to mini-brass orchestra that is slightly out of tune. Then there is about a minute of silence after which appears an exquisite slow and introspective grand piano solo. There is something here for everyone from heavy prog metal to experimental music fans, but some like myself may only find selected moments of interest.