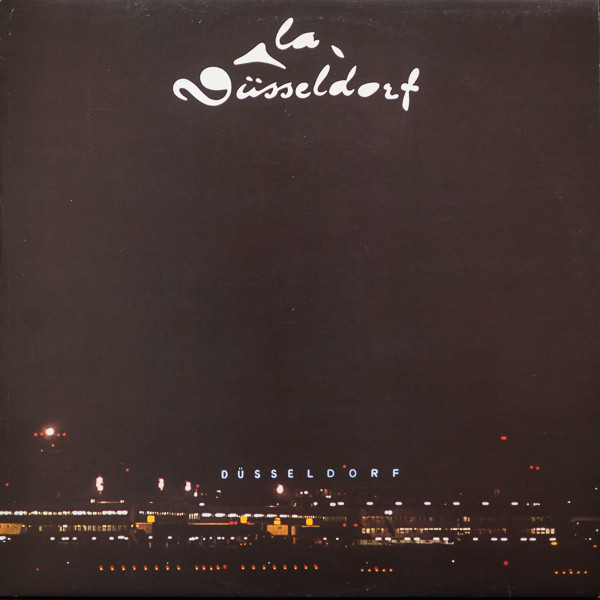 What might Kraftwerk have become in the guise of a guitar-band instead of a synth band? The toe-tapping oddments of this first La Düsseldorf outing from 1976 just may give a clue. Compositional frugality is herein expounded by Neu! veteran Klaus Dinger, master of the one-chord theme and variations, with sidekicks in brother Thomas Dinger and Hans Lampe. Guests chime in with extra keyboards and bass. All that is missing is Michael Rother's guitar playing! Vocals, guitar, and especially the drums dominate the scene, providing the machine-like rhythmic spark which forms the backbone of La Düsseldorf's outpouring of id energy. Avoiding cymbals by using tom-toms to drive the beat, Thomas and Hans hit upon a method Peter Gabriel would adopt six years later and get the credit for. Side one's festive, non-stop flow of inebriated madness is tastefully contrasted by the slower pace and whimsy of "Silver Cloud" and "Time" from the second half. Appealingly odd? Or oddly appealing? La Düsseldorf's intoxicated sound juggles this oxymoron in an endless effort to befuddle and amuse the wearisome listener, who feels perhaps he has heard it all. By verbal description you would likely consider their music one-dimensional and silly, yet under the surface is a slovenly sinister mischief-maker that mocks its simplicity at the same time. Still not as satisfying from a purely artistic stance as, say, Harmonia, (whose Deluxe LP foreshadows La Düsseldorf), Dinger was nevertheless ahead of his time, working in the pop end of Teutonic progressive rock with a unique sound whose influence would later appear (without being clearly recognized) in the music of David Bowie and others.