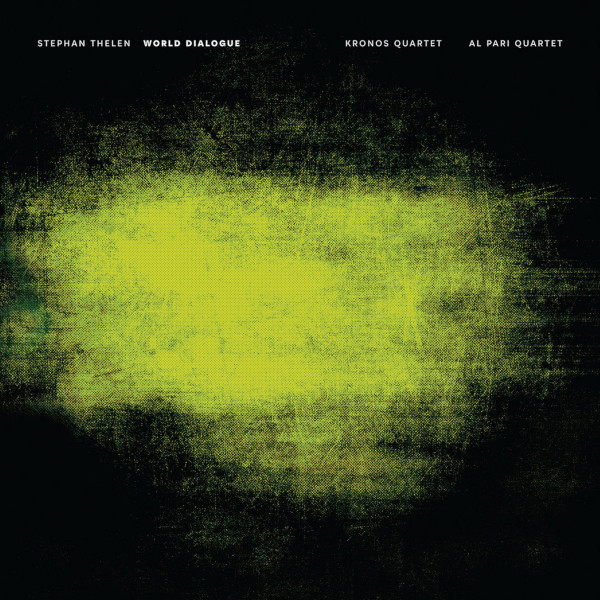 Between his work with Sonar and his own excellent Fractal Guitar album, Stefan Thelen has been forging a composition technique based on short motifs repeated by different instruments, often mixing patterns of varying length and meter. It could be regarded as a type of minimalism, blending some of the ideas of Philip Glass, Terry Riley, and Steve Reich with 80s and later King Crimson. With World Dialogue, he proves that the technique can be applied successfully to a string quartet. The album consists of four pieces, the first of which is “Circular Lines,” performed by Kronos, certainly the world’s foremost ensemble specializing in new and experimental repertoire for string quartet. Thelen had mentioned to journalist Anil Prasad that his dream was to have Kronos play a piece of his called “World Dialogue,” and as it happened, Prasad knew David Harrington of Kronos and introduced the two. Harrington liked the piece very much, but instead of recording “World Dialogue” commissioned Thelen to write an entirely new piece for Kronos. This became “Circular Lines,” which the quartet first performed in 2017 and also recorded for this album. It’s a fascinating work based on having three parts playing in 3/8, 4/8, and 5/8, while the fourth either floats freely with more melodic material or joins in with one of the other parts. The piece turned out to be challenging to play, but other quartets have also tackled it as an exercise in rhythmic playing. With Kronos unable to commit to Thelen’s original piece, Harrington helped by putting him in touch with Al Pari Quartet, a young Polish ensemble that had been playing “Circular Lines.” Thelen presented them with “World Dialogue” and two other pieces he’d composed, and their contributions complete this album. The title piece is largely based around parts that layer sevens and eights against each other. In the aggressive cello parts — you could even call them riffs — you can hear the kind of propulsive drive familiar in Sonar pieces, and the other parts fill in the beats in ever-changing ways. It’s not all mathematical exercise, however, and the music works through different sections where the four parts come together for powerful thematic statements. The other pieces are “Chaconne,” a short piece in 11/4 which features rhythmic parts scaled by different factors, and “Silesia,” a longer piece written at Al Pari’s request based on traditional Silesian music, but filtered through Thelen’s techniques. It’s in 13/4 and, like “Chaconne,” features layered parts of the same notes played at tempo and at half speed. Both are intriguing and exciting, and should appeal to fans of chamber music and experimental rock alike.