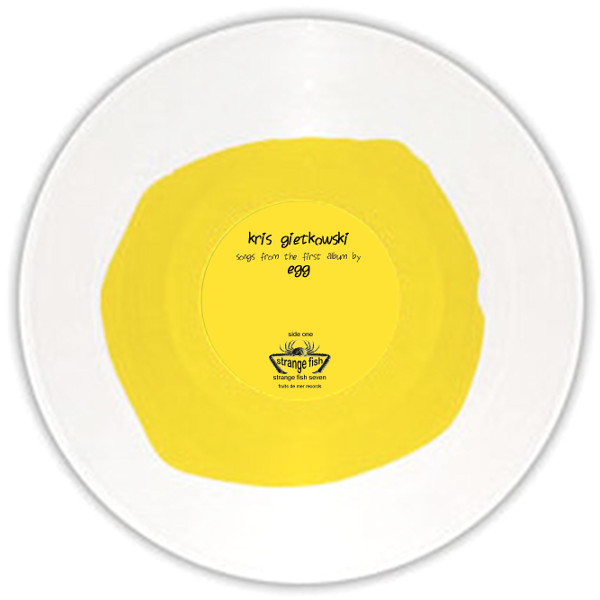 Fruits de Mer Records’ mogul Keith Jones was idly surfing YouTube videos one day searching for inspiration and hidden gems. You know how that goes, falling down internet rabbit holes and discovering something unexpected. So Keith stumbled upon a cover of a track from Egg’s first album by a group called Gietek. A little digging led to Keith discovering that Gietek is actually the work of just one person, Polish multi-instrumentalist Kris Gietkowski. Kris had recorded Egg’s first album for his own enjoyment and posted individual tracks on YouTube, little suspecting that a record label would find them and ask him to actually release his covers on vinyl. To add some sizzle to this April 2017 release, Keith chose to press the LP as a yellow and white color-in-color vinyl disc that is meant to look like a fried egg. Side One contains “While Growing My Hair,” “I Will Be Absorbed,” and “The Song of McGillicudie the Pusillanimous.” Side Two contains the four movements of “Symphony No.2.” The big difference between Kris’ covers and the original Egg LP is that Kris’ tracks are strictly instrumentals featuring Hammond organ and drums, so do not be surprised when you do not hear any vocals. Kris is a consummate keyboardist who exhibits a wide range in his playing styles across the seven tracks, at times evoking Hammond-meister Keith Emerson. Kris does not merely play chords, you will also hear single note melodies, and on Symphony No. 2 Movement 2 Kris turns on the glissando mode making this track very trippy. So if you are up for a unique and interesting take on the Canterbury sound, check out this new FdM release.