The next installment of the Progressive Warriors documentary series will focus on the vast body of music that falls under the banner of "krautrock." As most of our readers will know, previous films have tackled RIO and the Canterbury scene, as well as what we might call "mainstream" prog rock. 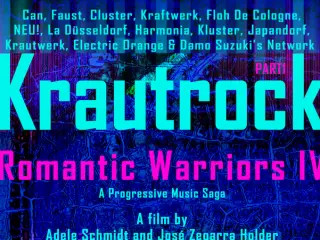 Hey there! Its Adele Schmidt and José Zegarra Holder, the producers of the documentary series on progressive rock "Romantic Warriors – A Progressive Music Saga". Our 4th film of the series, Romantic Warriors 4 - Krautrock (Part 1) is close to completion and we are asking for your support to push this film over the finish line. The fourth film covers the origins, Zeitgeist, and trajectory of the pioneering German 70s Krautrock bands from the Hamburg, Düsseldorf & Cologne regions.

We've reviewed previous Warriors docs (see here and here), and have no doubt this one will live up to the same quality standards. It's important that these strands of music get documented as the people who brought us the music won't be here forever, and memories fade. Documentaries like this bring infromation to people in a way that simple text can't.