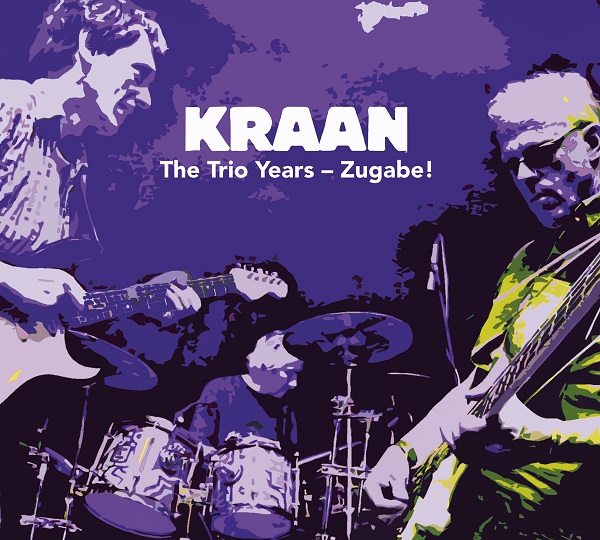 Those who are familiar with Kraan throughout their career know that they have some excellent studio recordings, but where they really hit their stride is in a live setting, as any of their previous five live albums will establish, and add this latest as number six. The Trio Years – Zugabe! is a live album that covers the same period of time as The Trio Years, released about a year ago and reviewed in these pages, although like before there is very little specificity about when and there the individual tracks were recorded, other than "live-recordings between 2008 - 2017 in Germany" and this latest set serves as a supplement to that earlier set. What needs to be said is that some of the songs presented here were also on The Trio Years, but they are different live versions (“Andy Nogger” and “Hallo Ja Ja I Don’t Know”), and furthermore, the live versions on the CD and LP versions of ...Zugabe! are completely different live takes, the LP containing seven live tracks, the CD containing five different live tracks, three studio cuts and a soundcheck (“Jam No.2”). To further confuse matters, the download version contains yet a different soundcheck (“Jam No.1 to No.3”) and possibly other differences in the live cuts. The long and the short of it is that to get the complete release you need to get both the LP and CD versions, and cherry pick the MP3 version for whatever is not included on those. Highlights of the LP version include the opener, a six minute version of “Nachtfahrt,” and a powerful yet succinct (at least compared to the ten minute studio original on the band’s 1972 debut LP) version of “Kraan Arabia.” Different live takes of “Borgward” are available on both the LP and CD versions, the latter is a mind-blowing thirteen minutes, while exclusive to the CD are three new studio cuts “Siesta,” “Hoch das Bein,” and “Birds,” a reassuring set that confirms the band is still able to create solid new material in their funky jazz-rock jam band style. “Jam No.2 (Soundcheck)” closes the CD with seven minutes of steady steaming grooves with plenty of soaring psychedelic guitar solos from Peter Wolbrandt, while bassist Hellmut Hattler and drummer Jan Fride keep the piece in forward motion as it goes. Fans of Kraan will definitely want to add this to their stash of consummate live recordings.