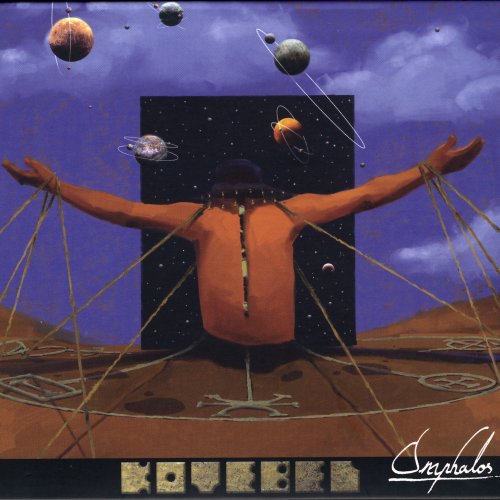 Omphalos is the fourth album by Spanish band Kotebel. Their instrumentation includes drums, bass, guitar, two keyboards, vocals, and flute. Vocalist Carolina Prieto sings softly in a soprano register. While vocals play an important role in many songs, a few tracks are instrumentals and many tunes that aren’t have extended instrumental interludes. Flute is prominent throughout the album, contributing both melodies and several solos. Guitarist Cesar Garcia composes two songs on the album and keyboardist Carlos Plaza composes the remainder. Plaza’s songs fall squarely in the classic symphonic progressive camp. They contain multiple sections, soft and loud parts, acoustic instruments, Mellotron…etc. The multi-section “Ra” opens the album and is a good showcase for everyone in the group. The jazzy “Joropo” is a piano-led instrumental with long flute and synth solos. The title track contains lots of pure vocals and a symphony of synths. The half-hour long “Pentacle’s Suite” has lofty lyrics dealing with the creation of the universe and, with the exception of “Mars Pentacle,” is surprisingly reserved tempo-wise. Garcia’s two compositions, “Excellent Meat” and “MetroMnemo,” almost sound like a different band. “Excellent Meat” is a hip track that’s much heavier and guitar driven than anything else on Omphalos. “MetroMnemo” has a quirky Gentle Giant type guitar riff with a Holdsworth influenced guitar solo. The absence of flute and vocals on these two tracks makes them seem somewhat disconnected to Plaza’s material. Overall, that makes Omphalos about 80% traditional symphonic prog rock and 20% edgier material.