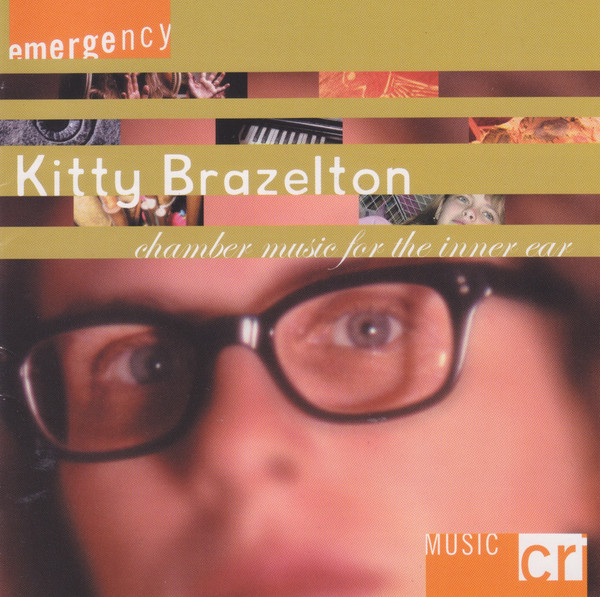 Besides leading the New York art-rock band Dadadah, Kitty Brazelton composes chamber music so adventurous that one critic (perhaps aware that she once studied with Robert Fripp) dubbed it “21st Century Schizoid Music.” Five of Brazelton's compositions appear on Chamber Music for the Inner Ear. “Come Spring” is a four-movement piece for brass quintet that mixes together modern classical, jazz, rock, Gregorian hymns, and free-form improv into a surprisingly coherent unity. The piece also demonstrates Brazelton’s willingness to explore new possibilities for using instruments: at one point, she has the musicians tap on their horns to create percussive lines. The other pieces are no less innovative. “R” is a six-minute composition for 5-string violin, acoustic guitar, acoustic bass, voice (Brazelton’s own), and bongos that sounds more like rock than classical; “Sonar como una Tromba Larga” is a piece for solo trombone accompanied by a soundtrack that includes processed sounds of the trombonist’s breathing exercises; “Called Out Ol’ Texas” is a duet for alto sax and cello that includes Latin jazz influences; and “Sonata for the Inner Ear” is a true sonata in three parts with an exposition, development, and restatement of a musical theme for an rock / jazz / classical ensemble of flute, bass clarinet, violin, cello, piano, organ, drum set, and marimba. I’m not normally a big fan of chamber music, but this isn’t normal chamber music. I can’t stop playing it. This CD doesn’t merely cross genre boundaries — it transcends them. My highest recommendation.