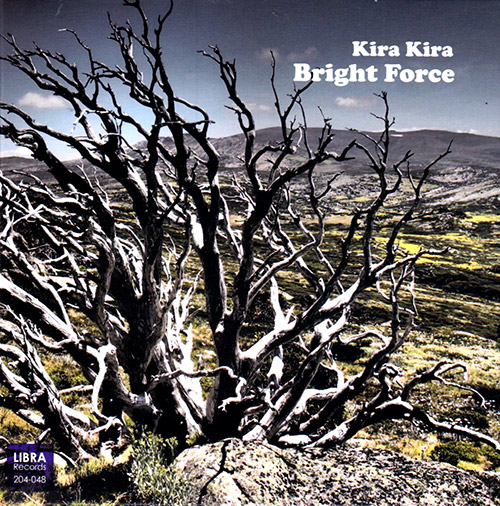 So I wonder what Satoko Fujii is going to do after releasing twelve albums in twelve months... (This is the fourth installment of her 60th birthday marathon.) Maybe take a vacation, but the various orchestras, quartets, trios, and big-bands she leads have already taken her just about everywhere in the world one can think of. I had never heard of Kira Kira before, but happy to learn of their work. This is Fujii’s Australian quartet, featuring trumpeter Natsuki Tamura, who plays on nearly all of her projects, drummer Ittetsu Takemura, and Australian keyboardist Alister Spence. The group began back in 2008 as the duo of Fujii and Spence, first with performances in Australia, and later on a tour of Japan that included dates with Fujii’s orchestra. In 2016 drummer Tony Buck of The Necks joined Spence, Fujii, and Tamura to form Kira Kira (meaning to sparkle or twinkle brilliantly) with new compositions and an appearance at the Melbourne Jazz Festival. The quartet had a great time and decided to schedule a Japanese tour in 2017, but scheduling conflicts prevented Buck from making the trip, so Tamura recommended Takemura to replace him on the Japanese dates. The performance at hand took place on September 12, 2017 at Knuttel House in Tokyo, and the recording turned out so well that they have decided to release it on CD. There are three tracks here; the ten minute opener, “Because of the Sun,” is Spence’s composition, a whirlwind of ordered chaos that lives, breathes, and grows as it proceeds. Throughout, Fujii plays piano, while Spence plays Fender Rhodes, often with a variety of effects pedals and so on. Having a second keyboard player surely takes Fujii and company into new directions, but this is still well within the jazz idiom, albeit crazy and free, these are definitely composed pieces. Second up is Tamura’s 13-minute “Nat 4” which launches with some brilliant trumpeting, but also provides space for a lengthy and impressive drum solo by Takemura, before it all gets back into a rousing free-jazz groove, with Spence puling out some absolutely bizarre keyboard sounds around the nine-minute mark, sounding like he’s running his Rhodes through a ring modulator. Last up is Fujii’s composition, the three part “Luna Lionfish,” which spans a full 35 minutes in total. The opening section begins as a collection of subtle sonic curiosities punctuated by Fujii’s piano that slowly builds over the duration. Over the course of the second movement which, the building continues with a stronger presence of percussion and trumpet, until it all takes shape in a tightly composed form for the entire group, culminating with a beautiful solo from Fujii. This leads directly into part three, which is highlighted by another great, and even longer drum solo, followed by another free jazz romp by the entire group, including plenty of Tamura’s trademark trumpet ‘sounds’, all seeming to end close to where part one began. All taken, this is an excellent disc; the more one listens, the better it gets.

Azigza - Kriya – Combining influences from around the world can be a dangerous enterprise for musicians. There will always be some who call foul at the “appropriation” of sounds from other cultures, preferring...  (2004) » Read more