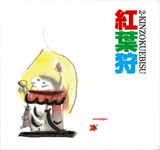 When one band traverses a wide variety of styles, there’s always the danger that diversity will dissolve into chaos, leaving the listener more confused than intrigued. This Japanese band inhabits that danger zone. This short album, at just over thirty minutes, covers Mellotron-laden symphonic rock along the lines of Anekdoten, rhythmic parts like King Crimson, rough psychedelic rock like a Hendrix tribute band, goofy vocals like a comedy troupe, and heavy metal like any of a thousand bands. While I don’t doubt that these elements could be combined into great music, here they only rate “interesting” and “promising” because it’s just a little too disjointed. I am confident that with time, the band can fuse their influences into something all their own, which should be unique, since no other band mixes quite the same elements together. The long title track is the best: a bombastic intro is followed by a building section with fragile female vocals backed by Mellotron. There are also sections with intense guitar harmonies reminiscent of various King Crimson eras, a lovely interlude for acoustic guitar and Mellotron flute. Where things get really confusing is on the other two tracks. “Higansumade” starts out with a heavy psych guitar riff and shaky male vocals, then detours into a middle section melodic guitar solo backed by Mellotron. The final track starts out as a headbanger until the silly voices come in, and its middle section is by turns symphonic and Crimsonesque and finally avant-garde with the vocals. Very odd.