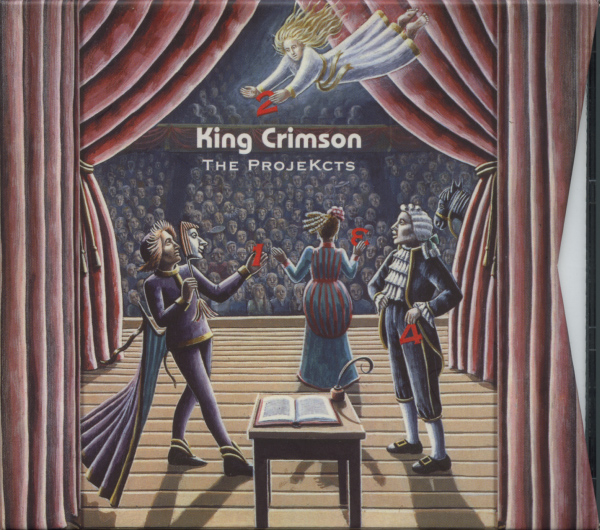 Despite casual impressions, recording and releasing the foundations for a new King Crimson re-birth is a big undertaking. Considering that there has been no specific time plan, Fripp has had plenty of time to consider alternative line-ups and literally arrive at the next incarnation of arguably one of the best bands in progressive rock (despite Fripp’s attempts to distance himself from that distasteful description). I’ve actually seen with my own two eyes two of these incarnations, (Projekct’s two and four) in San Francisco and marveled at the live communication between players and their disturbing themes. Those live shows and discs in this set have been more that adequately dissected in these pages.

My focus here then will be on the Projekcts that didn’t make it to the West Coast: Projekct’s one (UK) and three (Texas). P1 is the one where Bruford and Levin keyed off each other (I believe before the BLUE project was recorded). This was probably where the seed of that project splintered off the red vine. In an improvised setting Bruford really shines as accompanist and dialog extractor by pushing tempos along with Levin’s ominous bass thumping (in particular on track seven).

By contrast in P3, Pat Mastellotto has come a long way since his first appearance as the “other drummer” on Thrak. In fact, he’s done much to ascend and own up to a larger chunk of the percussion responsibilities of the band. This is one sound reason why I believe Fripp has allowed him the lion’s share of rhythmic duties in the new Crimson. In P3, Pat demonstrates his ability to inject new electronic percussion elements to the band (above and beyond what Bruford or Belew have attempted up to this point).

Across the entire set are Fripp with Gunn in hand, showering the landscapes with intuitive real time dialog and interaction. The Projekcts experiment has been a good thing for Fripp and the current members of the band (recording in Nashville), but what of Bruford and especially Levin (who has been conspicuous with his surprising silence on his website). Regardless, a new band is on the horizon to end this century, and will the work hold up to the succession of three re-births in so many decades? My guess is no doubt about it. The king has been captured red handed and convicted by circumstantial evidence; herein lies the proof.