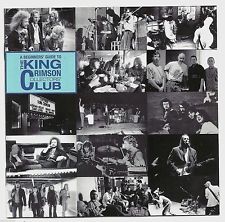 One thing is certain: Robert Fripp and company have found a marketing outlet to appeal to the hard-core Crimson collector. Those of us left in the financial lurch now have a suitable access to the ten private releases which DGM had only made previously available via subscription. The Beginner’s Guide samples ten representative tracks from these sets with many gems in the bunch performance wise. Arguably the first track is the best-ever live version of “21st Century Schizoid Man” from the legendary 1974 Central Park gig, which was the dénouement of Bruford / Wetton / Cross / Fripp line-up. I have to admit, the Fripp solo at the instrumental break is blistering and thus piques interest in the remainder of the tracks. This line-up (plus Jamie Muir) is represented with a track from Larks' Tongues in Aspic with some spirited improvisation by a group still in an R&D moment. Probably the least successful tracks come from the much maligned ‘72 tour for Islands, “Ladies of the Road” and “The Sailor’s Tale”; the former being a raucous throwaway blues while the latter is a spirited improvement over the studio version. The only studio outtake comes from CLUB8 — “Funky Jam” which pegs the grooving’ vibe of the 1994 Vrooom sessions outright. CLUB9 and 10 respectively are more recent releases with Adrian Belew giving an extraordinary solo on the live version of “People.” The single CD comes with detailed booklet chronicling the line-ups tours etc. Overall, I’d characterize the audio guided tour of the rarities catalog as a successful tease for collectors or someone willing to endeavor in the Crimson live legacy first hand.