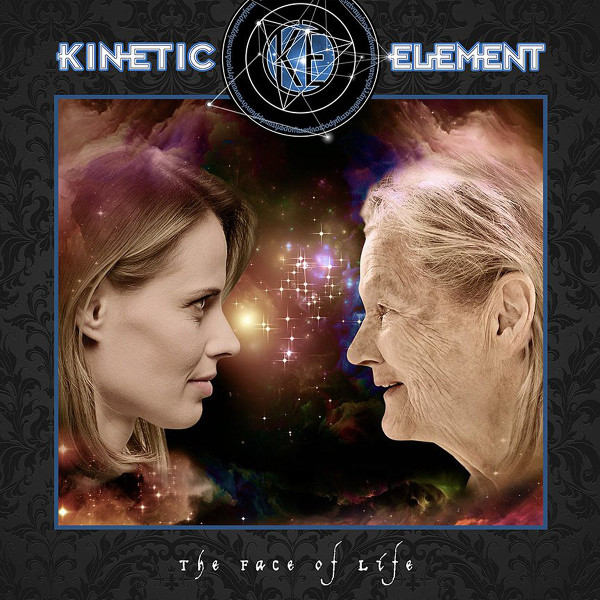 When The Face of Life arrived I was unfamiliar with the band Kinetic Element, and I’ll admit that my first few listens to the CD left me cold and even dreading having to write a review. But I’ve found that repeated listens have actually turned my attitude around. Kinetic Element’s music fits in the tradition of American progressive rock exemplified by The Underground Railroad, with strong work from vocals, guitars, and keyboards, and a style that is generally similar to mid-70s Yes. Mark Tupko’s bass is firmly in the Chris Squire tradition, with a trebly bite — from the sound, you’d swear he’s playing a Rickenbacker, but band photos show something else. Many of Mike Visaggio’s keyboard parts feature the classic keyboard sounds, from Mellotron-ish strings and choirs to grand piano to Hammond-ish organ (it’s so hard these days to tell what’s real and what’s emulated). The guitar parts are from Peter Matuchniak, and he’s got a range of Howe and Hackett moves and tones, as well as some contemporary (though not metal) touches. Saint John Coleman is the lead singer, and his parts are backed by Visaggio and drummer Michael Murray, often featuring the kind of countermelodies that Chris Squire worked in behind Jon Anderson. The album is a concept piece featuring four tracks, two of which top the 15 minute mark, and each track goes through many sections. In short, it’s chock full of the things progressive rock fans love, though if you’re looking for ground-breaking innovation you should search elsewhere. I’m quite satisfied with the result, and I’m glad they stuck to a standard LP length rather than padding it out with material to fill a CD length. (The CD actually features a short bonus track that I could do without.) This is just the right amount of music — any more and I’d find myself wandering away from it.

Akron/Family & Angels of Light + Meek Warrior – Peaceful droplets emerge to deposit us on a plane of squeezing voices gently chiding a plane of aberrant existence. There is quite a bit of hubbub about this agglomeration of miscreants and it must be...  (2007) » Read more