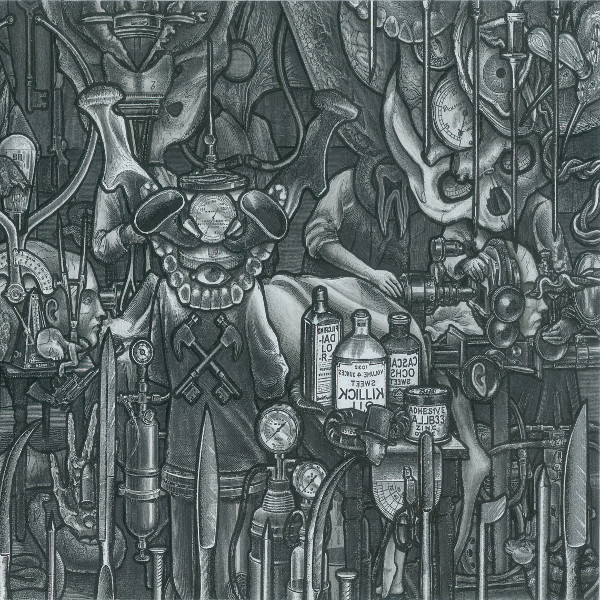 This represents the beginning of a whole new chapter in Killick’s body of work, although there have been many chapters before, so one shouldn’t expect that this will be the last. Exsanguinette is a four piece of Killick (guitar, electronics), Larry Ochs (saxes), Liz Allbee (trumpet, shell, electronics), and drummer Brann Dailor. Remember the coda of “21st Century Schizoid Man” where every player in King Crimson is just blowing off free in every direction, creating pure cacophony? Well, imagine if that ten seconds of pure freedom were expanded out to around twelve minutes — that pretty much accounts for the first two cuts here. To be fair there are fourteen tracks in all, and after this initial shock-and-awe not all of them are quite so ‘high-intensity’ — there are some quieter pieces where the quartet are making unusual sounds with their instruments, some that are drenched in feedback and electronics, and others that are more introspective explorations that don’t quite rise to the Excedrin level, but the common thread throughout all is the absolute freedom these players are enjoying. The first seven pieces (around 38 minutes) represent the album proper, followed by seven heavily processed remixes of each of those first seven, most bearing little resemblance to the originals, some even featuring vocals — and on the whole a bit easier to wrap your ears around than the raw live takes. All taken, an interesting listen.