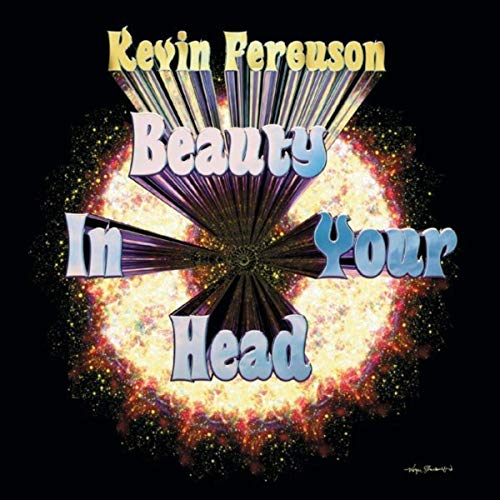 Ferguson is a Portland, Oregon based composer and multi-instrumentalist with nine releases to his credit. We reviewed his first album Strad to Strat way back in 1996, a masterful treatment of numerous classical pieces by Paganini, Vivaldi, Rimsky-Korsakov, and others, where his stratocaster is substituted for the solo violins. 23 years and eight albums later (and keep in mind this writer hasn’t heard any of the seven in between), he has released Beauty in Your Head, a very different animal, but after all that time one would certainly expect some changes from any artist. On his website, one can see that Ferguson sometimes plays with a three-piece band, but here, the eleven cuts appear to be entirely solo experimental entities performed using programs, loops, samples, and live playing (often multi-tracked), and occasional vocals, with a solid influence in varying degrees from Indian music and other West Asian sounds. I’m often reminded of a collision between techno and Shpongle, with synth orchestrations and various effected guitar parts over it all. Tracks like “Rock It” and “Long Way Down” represent the essence of rock guitar here, with some live vocals and / or manipulated voice samples, plus a bunch of other elements layered over the basic tracks. There are other tunes with impressive acoustic guitar playing, like “Dig It” and “Yes Way,” the former mixed wih some eclectic electric soloing, though even on those the backing tracks throughout appear to be pretty much entirely programmed or looped, something which would serve a solo live performance well. Around the album’s mid-point, the eastern influences become more prominent, though we are still treated some bad-ass guitar shredding. The programmed percussion becomes decidedly less Western, and the dweedling synth effects and vocoder twists make for some interesting psychedelic elements. “Tap It” almost sounds like an Indian answer to a clever surf guitar instrumental, if you can imagine what that might be. From there the fun gets even more experimental, “Funk It” cruises along for nearly eight minutes, followed by a heavily sitar-effected “Raag It” with magical cascading loops. There’s a lot of cool sounds and ideas presented here; Ferguson describes it on his site as ‘an ecstatic dance compatible mix’ which pretty much nails it.

Happy Rhodes - Many Worlds Are Born Tonight – Happy Rhodes is now at her eighth studio album, and it is her first to be released on a label other than her own Aural Gratification. Not that signing with Samson is exactly a move to the majors. This...  (1999) » Read more