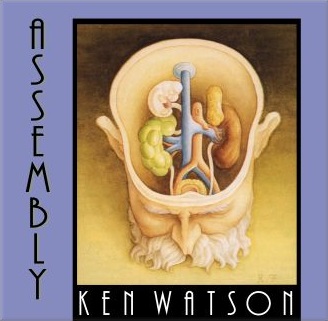 Originally released independently in 1985, Watson's home-brew project has stood the test of time: until this CD came out, that vinyl release with its low-budget black and white cover would find its way onto my turntable at least once a month for a refresher, I even bought a spare copy for the day I wore my original out. Now with this CD release, that day won't be arriving. This is smokin' hot, folks - the kind of music they don't make much of anymore; in it one can hear elements of fusion, the ECM sound, progressive rock, and funk. Watson plays guitar, keyboards and percussion, with Dave Webb adding drums (Craig Riches on the bonus tracks), and other guests adding occasional bass, piano and keys. As a guitarist, he might fall somewhere between Goodsall and Steve Morse, but in fact Watson (and this album) reminds me more of another equally obscure American guitarist, Tony Palkovic, than either of the aforementioned two. Compositionally, this is rich, full of drama and emotion, with plenty of stylistic flair. The album begins in a more or less fusion style ("Skeletons in Armor") and quickly builds upon this ("Next X"), adding more depth of style, culminating with the five-part title track, full of fury and unexpected changes. Then all changes with "Yuppie Jazz," a totally programmed synth track written by engineer Terry Morgan, save the drums added by Webb and a bit of Watson's guitarwork at the end. Things then get back on track and we continue the ascension into what may be the best two tracks: "Beating Swords into Plowshares" and "Elroy's Poem," two prog-rock opuses with strong fusion overtones. These two tracks alone are worth the cost of the disc. And here is where my vinyl copy ends... and the twenty minutes of CD bonus material begins! Three additional tracks recorded between 1988 and '93, that further develop and expand upon the styles from the album proper, with even greater instrumental and compositional variety. These are a real treat, especially the eleven minute "Next X, Part Two"! My only complaint is the botched indexing - "Assembly Part 1" starts at 5:40 in the middle of track 2 ("Next X"), and track 3, which should be "Assembly Parts 1-5" is actually only parts 2-5. But if you play the album straight through you'd never know the difference.

Trolley will wake you up