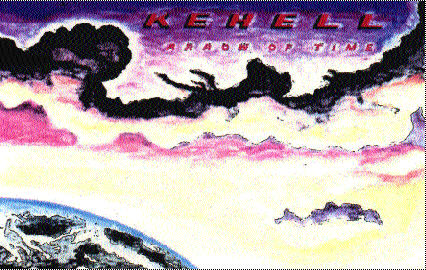 I first heard of Kehell on the Made in Japan label's "Jazz-Rock Sampler" from 1989, which was graced by the track "Triton" – among the album's best. Four Japanese musicians, Shigekazi Kamaki (guitar), Tsutomu Suzuki (keys), Moriaki Kakumoto (bass), and Toru Hamada (drums), collectively Kehell, play a brand of fusion that could be comparable to Jeff Beck, Holdsworth, Scott Henderson, and the like. I bring up these guitar giants because, above all, Kehell is a guitar dominated band – nearly all the songs were written by Kamaki, and his ripping solos are the high point of nearly every track. The rest of the band support him well – especially noteworthy is Mori's pulsating bass riffing style and Toru's ever-busy drumming – the two elements that, more than anything, offer warmth and spirit to the band's sound. Kehell seem to have two distinct personalities: one is the hard 70s style fusio-funk a-la Beck, the other being a more subtle and atmospheric style, which would include the exceptional title track, where keyboards step up a bit and paint a mood that serves as a backdrop for the rest of the song. These tracks are where Kehell really shine, as it is on these that the band offer a style that is more of their own creation. There are a few things that annoy me here – sometimes the drums are way too far up in the mix, and on one track "Funky Junk," Kamaki uses some kind of attack-delay on his guitar that takes out all the bite from his otherwise splendid guitar work. All taken, though, this is an excellent effort that should be heard by all fans of the 70s fusion school.