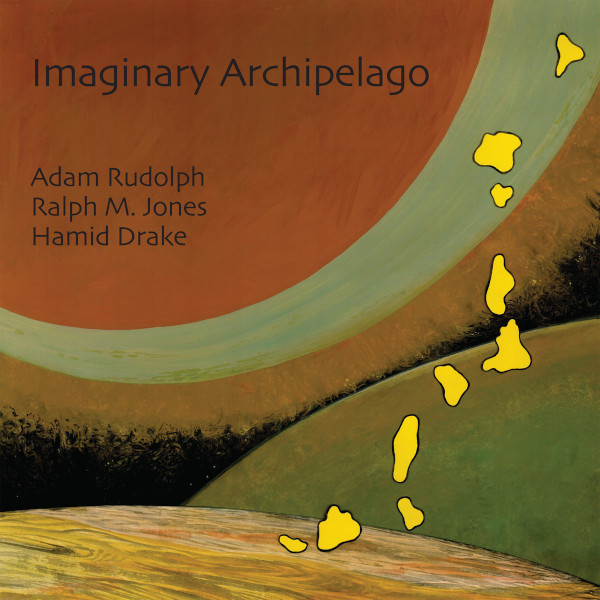 Imaginary Archipelago is an aural travelog of a group of eleven imaginary islands, each of which has its own unique plants, animals, and human cultures. Karuna Trio, consisting of Adam Rudolph, Ralph M. Jones, and Hamid Drake, have conceptualized this album based on these imagined environments. Their duties, as listed in the credits, consist of membranphones and idiophones (Rudolph, Drake), chordophones (Rudolph), aerophones (Jones), and voice (all), along with electronic processing (Rudolph). Readers unfamiliar with those terms are encouraged to investigate on their own. In more specific terms, the instruments are a wide variety of percussion and drums played with sticks, hands, and fingers, various flutes and reed instruments, piano, and a few other miscellaneous things here and there. While there are some sonic similarities to Chi (2019), which featured Rudolph and Drake with Dave Liebman, Imaginary Archipelago is distinct in a number of respects. First off, the eleven tracks are mostly concise, in the four to five minute range with only three exceptions. Second is the use of electronics, which are applied to the natural instruments in a variety of ways — echoes, twittering filters, deep reverberations, and so on. It’s a thoroughly fascinating brew, where a wooden flute is thrust into the realm of mechanical birdsong or a bass clarinet seems to emerge from a deep cave. Some of the tracks feature loose grooves, while others flow freely without steady pulse. The sheer variety of sound textures is constantly engaging, and each island has its own identity within this range. The electronics bring the sound out of any semblance of tradition or nature, though always blended with more organic sounds, as if they’re the product of a society that has learned to use technology in balance with nature. Which I suppose they are, though that society has a population of only three.