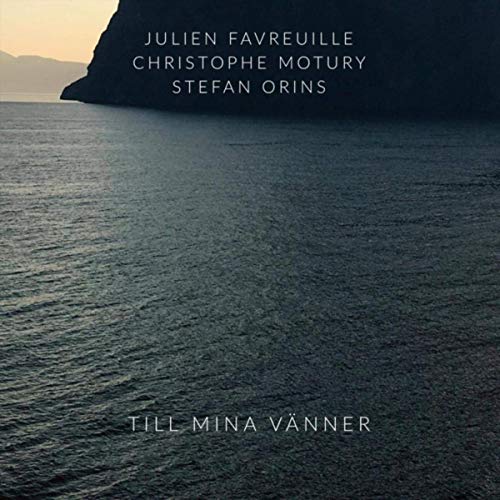 A most unusual jazz trio, in that there is no bottom end (drums or bass) to hold down the rhythm, but that’s not to say they’re not there, mostly implied by their absence using the piano. The title Till Mina Vänner means To My Friends in Swedish, and that’s what this group represents, three friends who have been playing together for many years in various configurations: Julien Favreuille (tenor sax), Christophe Motury (flugelhorn), and Stefan Orins (piano) are all members of the Circum-Grand Orchestra, a twelve-piece not-so-ordinary jazz band that has been together for at least fifteen years, a part of the Muzzix collective of artists and groups that we have covered regularly in these pages. Within the seven melodic tracks included here, Orins’ piano typically plays the dominant structural role, though he gets plenty of solo time in as well, while Favreuille and Motury carry the lead melodic points, often harmonizing beautifully, other times offering solos and asymetric elements to the overall structure. In a general sense, their sound is very soft and soothing, avoiding the jarring and chaotic elements of free jazz — everything here seems to be carefully scored, though there’s nothing in the credits saying who composed what, so one has to presume that these are all group compositions with plenty of space for improvisation, yet far from “free.” The sax and flugelhorn together take playful turns in melodic conversations offering a warm sense of humor within the pieces, though throughout the players’ number one effort is support of the composition. Because of the instrumental configuration, there always seems to be plenty of space within the measures offering each of the players a chance to shine brightly on every cut. It may sound simple on paper, but the concept works beautifully.

Ivanhoe - Polarized – Can't get enough of that Iron Maiden? Check out Polarized. There is no doubt, as musicians, Ivanhoe are first rate. The singer, Andy B. Frank is very good, if he's a German singing in English,...  (1999) » Read more