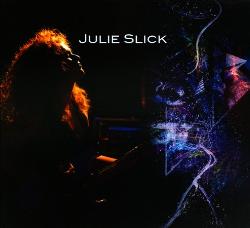 Being from a famous music family has definitely helped bassist Julie Slick get a leg up on the competition. A graduate of the Paul Green School of Rock, Slick and her just slightly older brother Eric are the talented offspring of Earl Slick, best known as one of Bowie's guitar aces from the 70s (Station to Station). Her musical ideas and experiments are no doubt strongly informed by classic King Crimson, not only due to alumni appearing across the 14 well constructed tracks. Slick works well with both Pat Mastellotto (two tracks) and with Marco Minnemann ("Many Laughs"). The latter piece is a heavy bass rave up with some blistering guitar chops to boot by the young lady! Of the two songs with Pat, "Aphrodite" is the clearly the funkiest on the disc with a hefty dance vibe, while "Rivalry" comes off more like 80s new wave pissing without a clever goofy lyric. Three songs exhibit Fripp-ian sonic washes, using them as sound map for aggressive rhythmic excursions especially apparent on "Choke" and "Shadow Trip." The former piece is probably the best Crimson-like piece on the disc with the relentless drum track and swirling synth figures. "Shadow Trip" is perhaps the most straight forward song in the collection, with a spacey synth line.