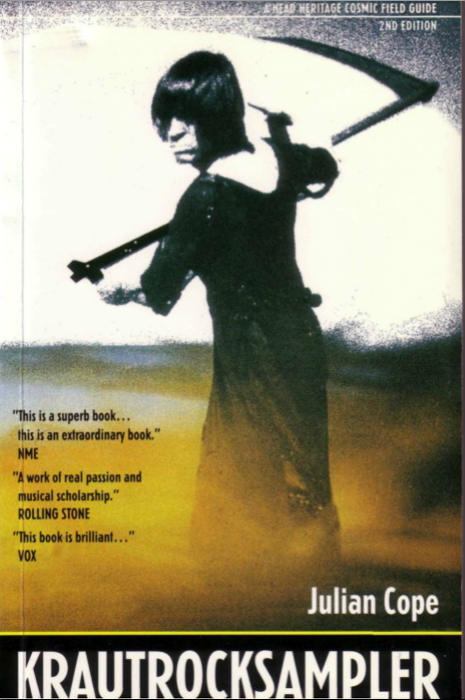 The British publication Krautrocksampler is here in its second edition. Running to 143 pages, it sports a few photos, and comes trimmed with sundry color reproductions of record covers from the period 1968-73.

The book is divided into four chapters. First comes a pre-history piece in which the author sizes up the "zeitgeist" of West Germany in the late 60s. We are then treated to a history of "Krautrock" and its progenity in the famous record labels: Ohr, Brain, and Kosmische. This is perhaps the most informative part of the book, and reveals a clear understanding and familiarity with the subject. Furthermore, everything in here was news to me (and doubtless many other people), so it is great to finally have the story in English of these events. Part three covers the fledgling years of Faust, Neu, Can, Amon Düül II, and Tangerine Dream. Again, you will be in for some very enlightening reading, and definitely learn a lot. However if you are sensitive to vulgarity and profanity in print, be advised — there is an abundance here, and pretty much everywhere else as well.

In part four Cope reviews his top 50 favorite albums of the genre. Making up the bulk are the aforementioned names, along with some early Klaus Schulze and Cluster as well. Appropriately this is the most subjective section in the book, and yet it reveals that he can write very decriptively, delving deeply into the soul of the music. His analysis casts a light on the krautrock world that exceeds a mere fascination with the superficial elements of the music. Rather, he illustrates it with metaphor in a way that I found very unique and interesting.

Unfortunately this is also where we run into trouble (for me anyway). Because anything that doesn't conform to the aesthetics of krautrock's youth era is sent through a meatgrinder and mercilessly vilified. (Even Henry Cow gets a slap on the wrist.) But if this music is so amazing, then it need not be so virulently defended by slagging off ELP, Genesis, etc. It comes across as sour grapes. I had to grit my teeth in order to justify his attitude, desperately trying to focus only on the book's virtues. But in my weakness I was constantly distracted and flustered by these unnecessary remarks. At times it felt as though the spirit of Lester Bangs had risen from the dead just to give me one last swift kick for bad behavior.

As a paean to early German experimental rock, aimed at dyed-in-the-wool fans of that period, Krautrocksampler works well. But it's likely to alienate fans of other progressive styles, or listeners whose taste for krautrock extends beyond 1973. Nevertheless it nowhere claims to represent the be-all and end-all complete encyclopedia of German rock. This is one man's interpretation of the music and era he loves. If you aren't sensitive to some heavy duty opinions then buy it, and judge for yourself.