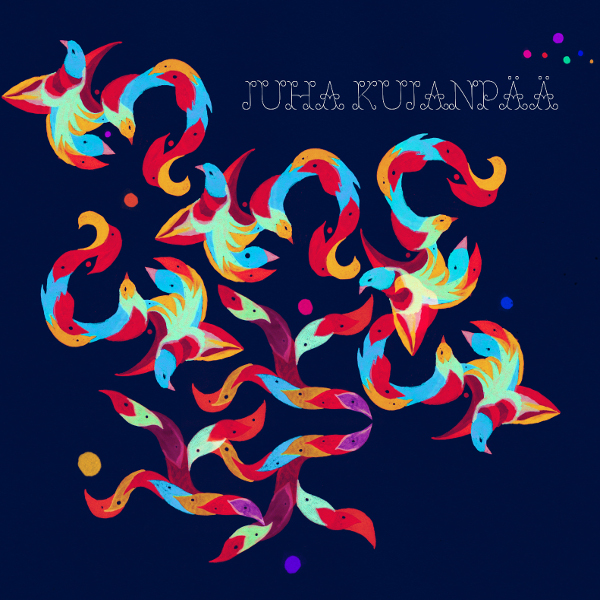 Juha Kujanpää’s debut album was one of the gems of 2013, a refreshing jewel of lovely arrangements and catchy melodies combining folk, jazz, rock, and classical styles seamlessly. Kivenpyörittäjä managed the trick of being beautiful without being sappy. Kujanpää is back now with an album very similar in sound to its predecessor. The ten tracks on Kultasiipi feature a base of keyboards and/or guitar augmented by what is essentially a chamber ensemble featuring strings, woodwinds, wordless vocals, and occasional percussion (sometimes a drum kit). The style is very similar to the previous album, though with “Kahvit Kuopiossa” we get a jaunty polka-like rhythm with banjo strumming. There is perhaps a greater attention given to the electric guitar this time out, mostly as a melodic voice, often doubled by a violin. On the upbeat tunes, the strings have a Vivaldi-like sweet energy melded with the energy of Scandinavian fiddle playing, but there are also quieter parts where piano and reed organ (sounding a bit like an accordion) take over in something like a sophisticated variation on New Age music. One of my favorite tracks is “Tapiirikuningas” (“Tapir King” in English), which features handclaps for its main rhythmic part and has synthesizers integrated into the ensemble with the strings. Its melody is handled at times by the electric guitar and it resembles a very creatively arranged folk dance. Kujanpää’s orchestrations generally treat all the parts equally, not as a lead instrument backed by an ensemble, and certainly not as a one-man-band who’s expanded his influence. Kultasiipi is an incremental development of Kujanpää’s style, not a departure, and while it is a very enjoyable listen, I have to wonder if now it’s time to bring even something different, whether it be modern electronics, harmonic expansion into more dissonant sounds, or further variety in instrumentation. But it’s a lovely diversion, and almost never fails to bring a smile to my face.