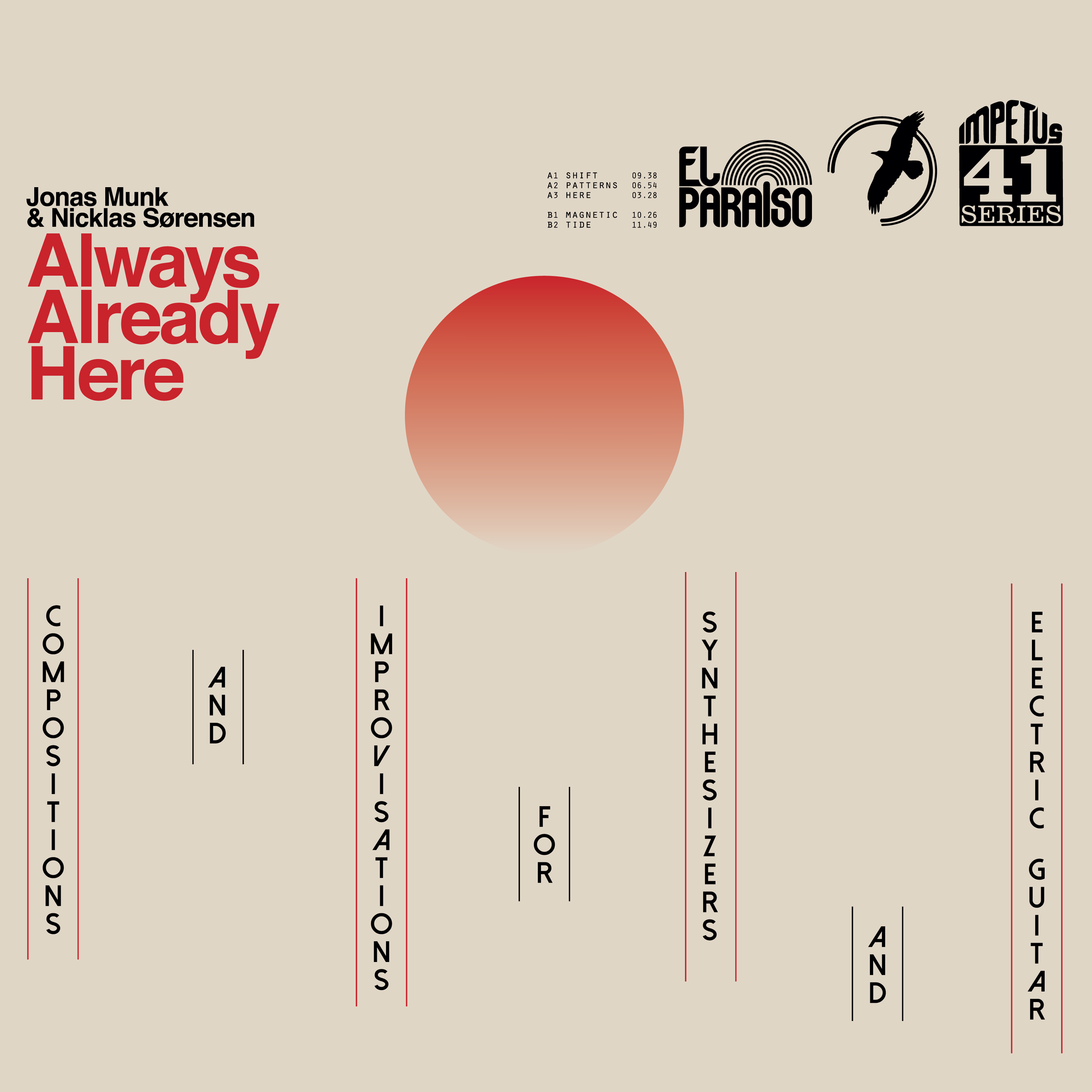 We know Jonas Munk from his work as longtime multi-instrumentalist (primarily guitar) and writer in the Danish powerhouse Causa Sui, as well as solo endeavors like 2012's Pan. Sørensen is the guitarist from the Danish band Papir, with half a dozen or so albums since 2010 and several solo releases as well. This collaboration explores the instrumental worlds of minimalism and psychedelia with guitars, synthesizers, and looping, borne of experimentation and spirited improvisation, being at once seductive and hypnotic. On the two extended tracks that open the first side ("Shift" and "Patterns"), we hear strong repetitive grooves yet nonetheless colorful and varied, morphing slowly over the long haul, somewhat reminiscent of Terry Riley or Steve Reich merging with Manuel Göttsching's Inventions for Electric Guitar perhaps with a touch of A.R and Machines. On both, hardly a moment goes by where something doesn't change, yet it all happens within an organic groove that both musicians actively create symbiotically as they go forward. Starting with "Here" at the end of side one the loops slow down and the whole endeavor takes a more psychedelic turn, still built on a foundation of sequences, but far more temperate and restrained, while the guitars climb to new heights painting a dreamy watercolor sky. Side two opens with the ten-plus minute "Magnetic," slowly building layer upon layer of looped synth and guitar sounds plus some odd percussive elements, gradually rising, appearing, fading, and coming back again, following that seemingly effortless groove that permeates the piece. The fade down is slow, but introduces more ambient elements void of the punctuation, awash in a drift of beauty. The twelve minute album closer "Tide" carries this feeling forward with a deep droning bass foundation under the wandering guitar loops at the surface, all the while growing forward in a shimmering ambient bliss. Overall, Always Already Here doesn't sound like a definitive statement, but instead the explorative first installment of a work-in-progress that hopefully Munk and Sørensen will choose to continue in the future. A great album, indeed.

Scott Mosher - Deep Horizon – Progressive metal has been around long enough now that a new release has to have something different about it in order to catch my interest. Scott Mosher does a good job doing that with the first...  (2007) » Read more