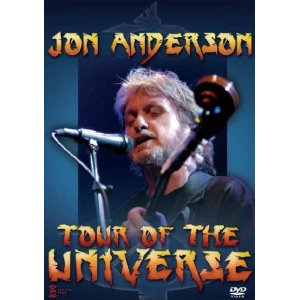 Since the last full Yes tour in 2004 Jon Anderson has taken it upon himself to spend some time shoring up his solo career endeavors. Tour of the Universe consists of his appearance at the XM Satellite radio studios doing a live show with minimal backing, spotlighting new music and stripped-down versions of more familiar material. Having seen a later incarnation in 2005, I was interested to see how the set list evolved as Anderson demonstrated how he has become more comfortable on the live stage solely backing himself with shorter new songs such as “Harmony,” “Phi,” and “Set Sail”. Of these, the standout tracks include “Standing Still,” which is backed by computer generated imagery and the straightforward lyric of “Show Me” backed by Rick Wakeman’s piano. Yes songs include “Long Distance Runaround,” a lyrical excerpt from “Revealing Science of God,” and “Yours Is No Disgrace.” Each rendition benefits from the composer’s immediate performance both retrospectively and embracing current times. Visual backing includes footage from the Vietnam War, which serves as appropriate subject matter for the singer and his song. Additional film includes special footage on the intuitive relationship of the Golden Mean to Anderson’s songwriting style. At age 60, the long-time singer is in good vocal form across the 23 tracks that span much of his career.