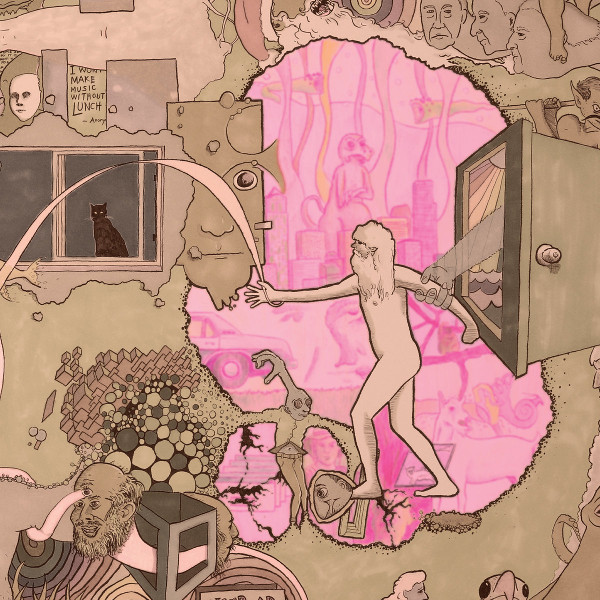 It’s been several years since Johnny Unicorn gave us Angels in the Oort Cloud, but he’s been very busy, between working with Autumn Electric, recording untold thousands of short songs as Zorznijor, and guesting on other people’s albums. Here at long last is the next installment in the unpredictable Unicorn Saga. Unlike Angels, Heavy Jugs to the Moon has no lengthy epics, consisting of 22 tracks ranging from under two minutes to nearly seven, with varying instrumentation and personnel involved. It starts out with “The Heavy Overture, Pt. 2,” an instrumental of shifting meters and catchy melodies on which Unicorn plays all the instruments. For other tracks, he’s helped out by others, with Naomi Adele Smith (keys, vocals, marimba) being the most frequent collaborator. Eight different drummers (nine if you count Unicorn himself) take part, including Bob Drake on one track; of several guitarists, Max Steiner (who was on the previous album) contributes most spectacularly, with some wild playing on quite a few songs. Rather than sounding patched-together, the album has a smooth flow and some of the tracks almost run together like sections of a suite, in spite of the stylistic diversity. We get touches of new wave rock, latin, psychedelic rock, noise, 60s go-go, electronic dance music, disjointed avant-prog, catchy art-pop, and more, but there is an esthetic thread that ties it all into a unified whole, a melodic sense that manifests in different ways. I suppose some listeners might be put off by Unicorn’s voice, which is somewhat thin and a little nasal, but his intonation is good and I don’t have a problem with it. Heavy Jugs to the Moon is a fascinating, unpredictable journey with a trickster tour guide, loads of fun if you don’t take music too seriously, but seriously well made. I should also mention that the CD comes in a lovely mini-gatefold cover with a fold-out poster containing the lyrics and credits along with quirky artwork.