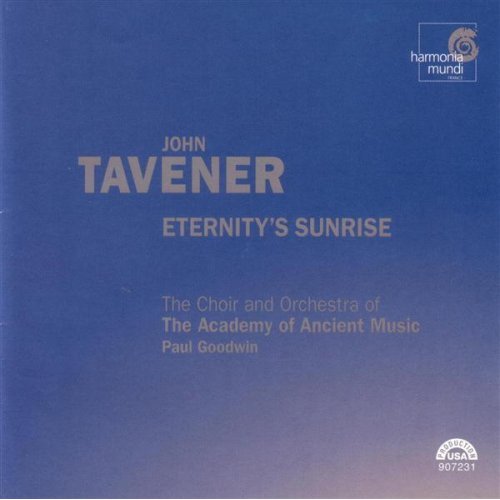 The British composer John Tavener has struck a chord with a significant cross-over audience. Like Arvo Pärt, Tavener creates a sumptuously gorgeous music infused with his belief in God and a desire to create music which honors and glorifies Him. And this is glorious music; indeed the composer admits to finding this his most beautiful release yet. As does Pärt, Tavener works with an overtly tonal (or modal) language, but he is no neo-romantic. Rather, his style, both musically and performance-wise, derives much from the Renaissance. In fact, this music was commissioned and performed by the Academy of Ancient Music Orchestra and Choir for their 25th anniversary. Invoking the British tradition of the High Renaissance, including composers such as Thomas Tallis and John Taverner (note the difference in spelling, though it is thought that they are distant relatives), composers whose sweet and resplendent music falls in the same category as that of Palestrina, Tavener uses modernisms and departs from the Renaissance style as he sees fit. Thus, there is a timeless and reverent quality about his music that appeals to a broad audience without pandering to it. The crystalline, pristine performance by the Academy of Ancient Music, the pure and exacting singing, sans vibrato, by soloists Patricia Rozario, Julia Gooding, George Mosley and Andrew Manze are simply magnificent. Stunning.