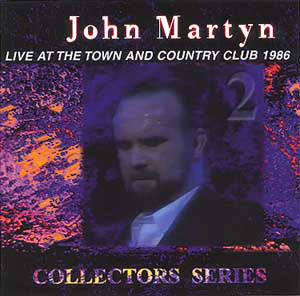 John Martyn has been writing personal songs and singing them in his inimitable style for quite some time now, and while he has never become the household name that Van Morrison or Joe Cocker has, he does have many dedicated fans. His lyrics are often incisive, and his gruff voice can be quite pleasant or menacing depending on his mood. This live set from 1986 comes from a point in his career when he had abandoned the experimentalism of the early 70s for a more mainstream approach. Generally his style here is his personal take on middle of the road rock, well done but not innovative. His backing band for the show is uncredited, aside from drummer Arran Ahmun and keyboardist Foster Patterson, but includes saxophone and almost certainly a second keyboard player. While it is hard to fault the sincerity and energy of the playing (and the audience obviously loves it), many music lovers would perhaps prefer a little something to set Martyn apart from legions of other comparable artists, from those mentioned above to Sting, Al Stewart, and Steve Winwood.

Ruins - Hyderomastgroningem – With this album, this Japanese duo provides a pithy follow-up to their 1993 album Graviyaunausch. Ruins comes back in full force with 20 new compositions clocking in at nearly 70 minutes. Here, the...  (1995) » Read more