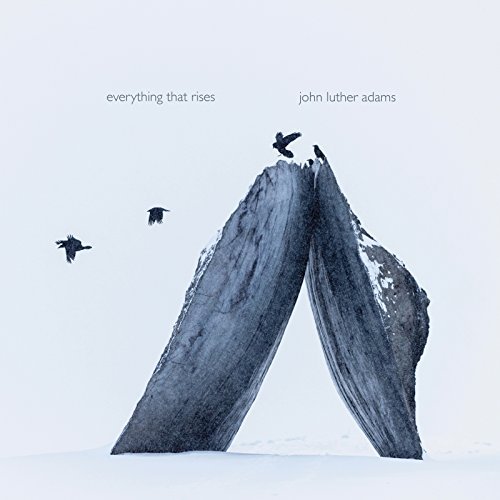 Adams is an American classical composer, born in Mississippi, who studied music at Cal Arts in the 70s, and who spent over 35 years of his adult life living in Alaska, during which time he performed as timpanist and principal percussionist with The Fairbanks Symphony Orchestra and The Arctic Chamber Orchestra. The majestic beauty and natural wonder that he encountered during his many years in Alaska have served as inspiration for his numerous compositions (over 50) and recordings (over 25, on various labels) over the years, and continue to do so even though four years ago he relocated to the lower 48, now splittig his time between New York City and the Sonoran Desert in Baja California, the latter which provides additional wide open spaces and sources of inspiration. On his latest Everything That Rises, the work is performed by a string quarted featuring two violins (Christopher Otto, Austin Wulliman), viola (John Pickford Richards) and cello (Jay Campell) collectively known as the JACK Quartet (the K is for original cellist Kevin McFarland), based in New York City. Like many or most modern classical compositions, the composer does not perform. Everything That Rises is a single piece nearly an hour in length, beginning with the cello, the quartet is doing ascending scales at various speeds, the cello more slowly, the violins and viola at their faster paces, continuing through these melodic loops for the duration of the piece, at times with harmony, and at other times with effective disonnace, creating interest, tension, and release as the piece goes forward. The intervals grow progressively smaller as they spiral upward, always rising. One might be reminded of an orchestra tuning up, playing scales before a performance, but re-imagine the same thing with only four players there, following a score with a definite plan. Overall, the piece generates initial interest, but after about the fifteen minute mark onward one recognizes that the same loops are repeating over and over with only slight time shifts and variations, and the piece slowly becomes more ambient and relaxing.

David Garland - Control Songs – David Garland is one of a rather small group of experimental singer/song writers. They are not cut from same bolt of cloth as, say, Paul Simon, Joni Mitchell or James Taylor. Instead, Garland, along...  (1999) » Read more