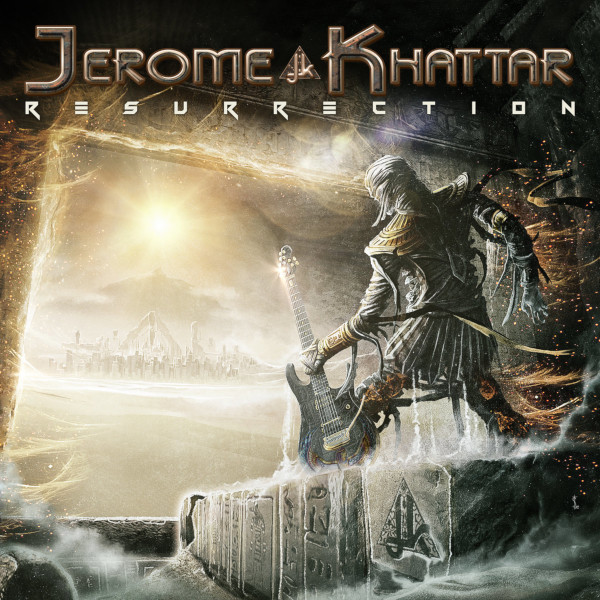 At hand is the debut release by Jerome Khattar, a French-Lebanese guitarist born in Paris who grew up in Dubai, UAE, in a multi-cultural environment with exposure to many different types of music, from traditional Arabic music to a variety of western styles, though what seems to have made the deepest impression are movie soundtracks, rock, and metal, though the influence of Arabic music is never too far away. Having started learning guitar at the age of fourteen, he enrolled in the SAE institute in Dubai where he received his degree in audio production, but ultimately his interest was in performing, which led him to the Berklee College of Music in Boston. While completing his studies there, he served as guitarist, composer, and co-lyricist in a local prog-metal band, and had also played in in a band called Aneuryzm back home in Dubai, in addition to composing several film scoring projects. Resurrection is a four-song EP, essentially the equivalent of a single album side, and an impressive debut if there ever was one. Combining the elements of melodic progressive rock, touches of heavy metal, a strong influence of Middle Eastern styles, and a widescreen cinematic approach to production, each of the four instrumental tunes (there are some wordless female vocals on two of the cuts) offers a different perspective within the scope of what Khattar does. Certainly there are some fast runs of million-notes-per-measure fretwork as part of the metal element, but also stretches of beautiful symphonic grandeur — that’s that soundtrack influence that permeates his work. Khattar plays guitars throughout, along with drummer Mathieu Danesin. The title track and the opener “Origins” are the two with the most evident Arabic vibe, and for those he has a guest darbuka player as well as a female vocalist, and guest keyboardist on the opener. The result across the four cuts is potent and powerful, and Khattar is definitely onto something very original.

Steve Howe - Homebrew – This new CD is a collection of guitar pieces and song writing ventures by the noted Yes guitarist which covers a span of over twenty years work from several solo and band projects. Almost completely...  (1996) » Read more