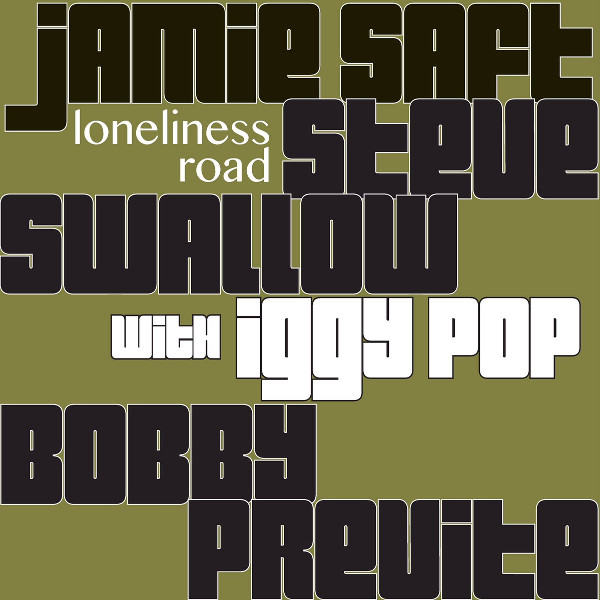 Among Jamie Saft’s intermittent projects is this trio with Steve Swallow and Bobby Previte. This is a classic jazz piano trio, where Saft eschews any other keyboard instruments, leaving Swallow’s bass guitar as the only electric instrument used. Previte sticks to established jazz style on his drums, not venturing into the kind of rock and avant-garde playing he is generally known for. While in many ways Loneliness Road is a traditional piano trio album, there are a few qualities that distinguish it from thousands of other recordings with the same kind of lineup. Swallow’s playing could often be mistaken for an upright bass if you’re not paying close attention — he doesn’t use a pick, and he doesn’t indulge in the kind of has-to-be-a-fretless playing that many players do. Saft approaches the piano in a very lyrical and impressionistic way, and when he does go in for fast runs or arpeggios, they don’t come off as flashy. The harmonies and chording choices are sophisticated but not dissonant, with occasional hints of gospel and blues. The arrangements sometimes venture into fairly free improvisation, but never get too chaotic. And the final distinguishing feature is the presence on three tracks of singer Iggy Pop. There may be singers who are even less obvious choices to work in a jazz setting, but Iggy has certainly not been known for subtle delivery in his solo work or with The Stooges. On “Don’t Lose Yourself” and “Everyday,” his world-weary tone brings to mind Tom Waits and later David Bowie, and on the title track he ventures into less bassy areas, even adding some backing parts. I find it fascinating that the vocals were not conceived as part of the compositions — the trio recorded the tracks as instrumentals, then sent the results to Iggy, who created his own parts with his own lyrics to fit with what was already recorded. While a lot of pop music (excuse the pun) may be created this way, it’s unusual in jazz, and it’s testament to the skill and taste of all involved that it works so well. Compared to most of what’s on RareNoise, Loneliness Road is pretty straight, but it is in no way less interesting or creative.