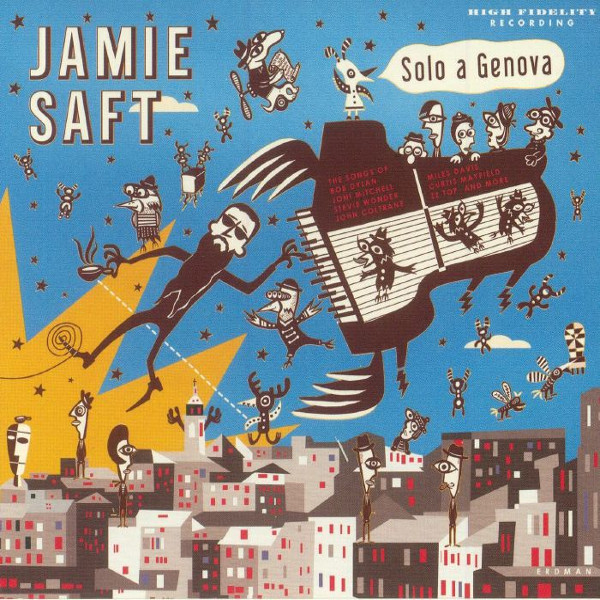 One thing you can count on from Jamie Saft is that each new recording has a good chance of sounding unlike what you’ve heard him do before. I’ve heard him in a variety of settings, from noisy organ trio (Spanish Donkey), noisy free improv (Slobber Pup), more conventional free jazz (if there is such a thing), dub-influenced latin jazz (New Zion), piano trio (with Steve Swallow and Bobby Previte), and even lap steel guitar. This live recording is the first time I’ve heard him doing an entire set of solo piano, and it is a beautiful outing that refuses to be constrained to the jazz idiom. Much of his playing reminds me of Johnny Costa, the nimble pianist who made Mr Rogers’ Neighborhood something more than a typical children’s show. I hope I’m not turning any readers off by that comparison — if anything, Saft’s playing is more harmonically varied than your average Costa, but the way he uses scalar and arpeggiated flourishes is similar. Two original tunes are included in the set (“Gates” and “The New Standard / Pinkus”) along with interpretations surprising (ZZ Top, Jimmy Jam and Terry Lewis, Charles Ives), more expected (John Coltrane, Miles Davis, Bill Evans), and in between (Bob Dylan, Joni Mitchell, Curtis Mayfield, Stevie Wonder). No matter the source, all are masterfully arranged, whether moody and meditative or energetic and hyperactive. There are occasional nods to the blues on pieces where it’s appropriate, and when he ventures into alternative harmonizations of a melody, you won’t hear a lot of typical jazz voicings. A few of the tracks feature dextrous runs up and down the keyboard, but his delivery is almost relaxed even at what seems like it must be the limits of human finger movement. His rendition of “Sharp Dressed Man” includes reaching inside the piano to stroke the strings, and must have greatly surprised and amused the audience when (or if) they realized what song he was playing. He closes the album with a beautiful rendition of Dylan’s “Restless Farewell,” and surely his poignant rendition of the folk-song like tune left the audience both satisfied and wishing there could be a little more.