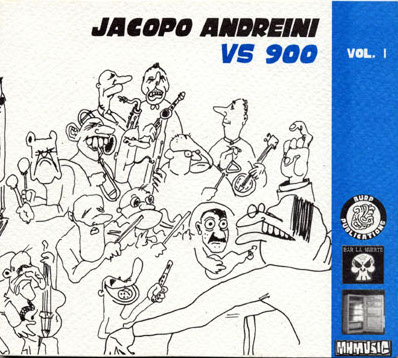 Avant garde music is tricky to pull off, no matter whether it’s in the genre of jazz, rock, or whatever. There can be a fine balance between unfettered artistic expression and unlistenability. Andreini presents a self-consciously arty blend of jazz and rock with a few touches of classical and a lot of chaos thrown in. The instrumentation is generally fairly large, with the rhythm section augmented by horns, saxes, strings, and occasional vocals, along with a wide variety of unidentifiable noises. The liner notes are filled with odd bits about each piece, including irreverent musicological notes on the compositional techniques (and non-techniques) involved. Some of those apparently include the drawing of cartoons on the score for the musicians to interpret, parodies of disparate styles combined together, and the combination of live and studio performances of the same piece. Were it not for the healthy sense of humor Andreini uses to approach everything, the whole thing would be an unlistenable mess. As it is, only half of it is an unlistenable mess, very interesting in concept but too incoherent and annoying to hold the attention of all but the most diehard fans of the avant.