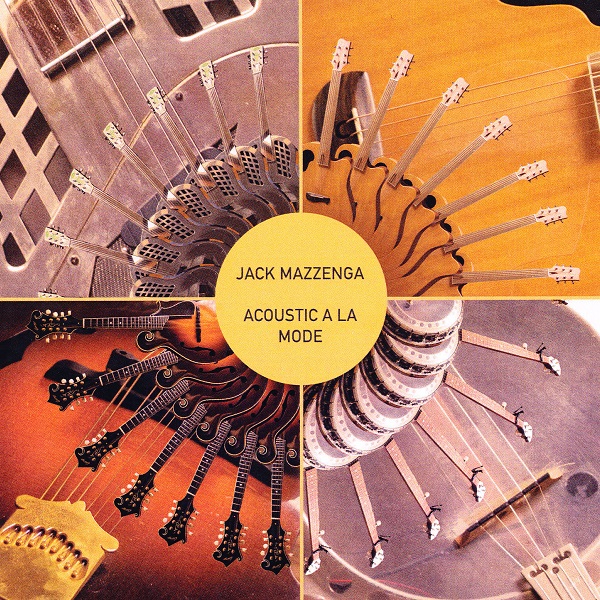 Frets are for wimps. Guitar? Banjo? Mandolin? We don’t need no stinkin’ frets! Guitarist Jack Mazzenga returns with Acoustic a la Mode, which treads somewhat different territory than Had to Say, his 2013 release. Aside from the bass guitar (fretless, of course), there are only acoustic instruments, the majority of them played by Mazzenga himself, though with a bit of help from Neil Haverstick (fretless banjo, oud), Jim Petti (bass), Michael Thompson (percussion), Mitch Goldman (trumpet), and Joe Brown (tenor sax, flute). The general style could be seen as progressive folk perhaps, with some touches of country swing, jazz, and just plain kick-butt pickin’. It’s to Mazzenga’s credit that most of the time, you wouldn’t even know the instruments are fretless – there are no gratuitous glissandos or other cheap effects, just solid playing, imaginative and entertaining. Some highlights are “Reelism,” which features a stunning acoustic guitar part that, if played on an electric, might well work in a technical metal band; “Pike’s Slough,” which is a solo mandolin piece that might make you reassess what a mandolin can do; and “Tongue and Groove,” which has a fun Middle-East-meets-surf vibe to it. Mazzenga’s playing can be seen as an American counterpart to British pioneers like John Renbourn and Bert Jansch, or Davey Graham before them. He’s expanding what instruments can be expected to do within an acoustic context, and hybridizing techniques and sounds from anywhere and everywhere. Don’t be scared off by thoughts of a bluegrass connection: this is fun music, played with a sense of wonder and excitement, and should be enjoyed for its artistic merit without such limitations.