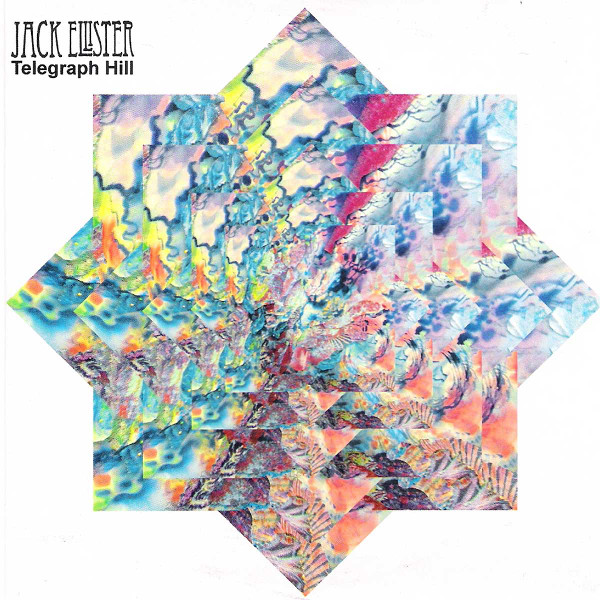 Jack Ellister has been appearing on a variety of Fruits de Mer releases since 2012. Now for the first time he has released a full length album on another label, You Are The Cosmos. As a change of pace from his usual style of energetic psychedelic music, Telegraph Hill is basically an unplugged version of Jack’s music, though electronics and electric guitars appear from time to time. The focus is on his voice and acoustic guitar, with drums and percussion, flute, violin, didgeridoo, and synths played by Jack except for drums played by his long term collaborators Tomasz Helberg and Nico Stallmann. Jack previewed his album at Fruits de Mer’s 10 Year Anniversary show in Glastonbury in May 2018, as well as providing a special edition of 100 green CDrs to the attendees. And if you were able to snag a copy of the double DVD of the event, you can watch Jack play two of his songs (“Telegraph Hill” and “Reminder”) on acoustic guitar, even more stripped down than on the album. The album opens with “Roots,” a hauntingly beautiful acid folk song with Jack’s vocals not entering until the mid-point. Things start to get a little freaky on the next tune, “High above Our Heads,” with a combination of drums, electric and acoustic guitars, vocal effects, and the “birds of purgatory” flutes. “Maureen Feeding the Horses” is a short instrumental of synth chords that slowly drift into a delicate acoustic guitar melody. “Fill Another Glass” could be an acoustic pub singalong song that reminded me a little bit of Donovan’s “Atlantis.” “Mind Maneuvers” is a saucy little funky latin number, a pseudo bossa nova, with bongo drums and a soaring violin solo. The title track is an acoustic oceangoing song with Jack channeling Syd Barrett. Then he shifts into Brit psych-folk busker mode with “Reminder” in the style of John Renbourn. “Icon Chambers” is a trippy little instrumental of dripping electronics and lo-fi cheesy analog keyboards. And the album closes with its pièce de résistance “Condor,” an amalgam of acid folk and raga rock, or a new term, raga folk. Jack’s droning didgeridoo provides the foundation for his slow acoustic guitar and glissando slide guitar, slowly ascending and descending the scale. Alternating between trippy and melodic, “Condor” is an excellent instrumental and a great way to cap off the album.