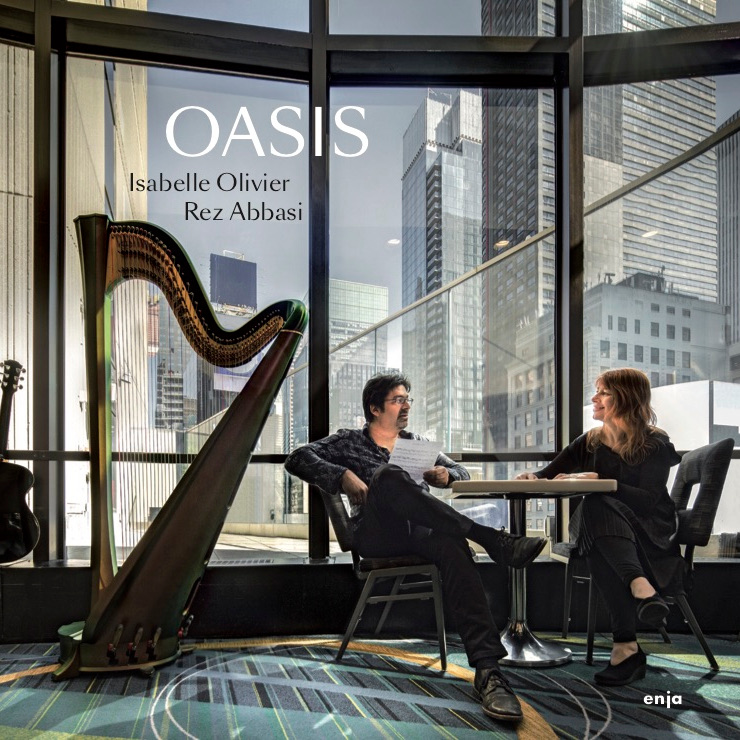 A big part of my enjoyment of music, and certainly what pushes my exploration forward, is finding something that pushes a boundary, defies conventions, and piques the imagination in a way that hasn’t been done before. Taking a known idiom and expanding it with a new cross-cultural instrumental vocabulary is always a recipe for something good, provided that it’s in the hands of capable and imaginative composers, which in the case of Oasis, it certainly is. The seed for this project was planted several years back at a jazz festival in France, where the idea of creating a soundworld between guitar and string harp was discussed by the two principals, leading to a grant by the French American Cultural Exchange in 2018, when the work on this project began in earnest. Rez Abbasi is a Pakistani born American guitarist and composer with numerous previous releases and collaborations we have covered in these pages before, while Isabelle Olivier is a French harpist and composer with half a dozen solo recordings to her credit at this point in time; of the nine original compositions on Oasis, six are credited to Olivier, three are Abbasi’s, plus the album opens with Abbasi’s interesting arrangement of “My Favorote Things” which we all know from The Sound of Music. Originally it was simply intended to be a duo, but as the project evolved, both felt the compositions would be better served by the addition of percussive elements, so they added Prabhu Edouard on tabla and kanjira (Indian frame drum) and David Paycha on standard drum kit, resulting in a full quartet on every track. When the original material begins on track two with Abbasi’s “Lemongrass,” we have a brilliant blending of sounds that are at once open and free, but loosely fit into the world jazz idiom, with guitar handling the structural elements along with the percussionists, and the melodic elements proposed mostly by harp. The next two pieces, “Cherry Blossom”and “Timeline,” are both Olivier compositions driven by a strong harp melodies, yet remaining a bit more introspective overall, though the latter grows in intensity with the addition of electric guitar. Abbasi’s “Stepping Stone” grooves along nicely with several freewheeling improvisational breaks and solos from all, while Olivier’s “Dodeca” seems like pure improvisation that grows organically as it goes. Sometimes one might be obliquely reminded of the work of Steve Tibbetts, and at other times the world music group Ancient Future, but truly this is a unique creation like no other that seems to transcend all boundaries.