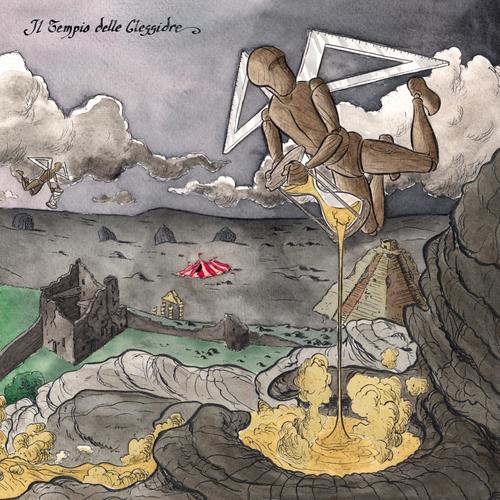 If you yearn for 70s Italian prog, rejoice as this genre is alive and well with the next generation of bands. The best is Il Tempio delle Clessidre (Temple of the Hourglass) whose name is a reference to Museo Rosenbach's classic Zarathustra. And their name is more than a passing reference as the band's founder Elisa Montaldo recruited Museo Rosenbach's lead vocalist Stefano Galifi aka Lupo. Lupo is 63 and the rest of the band members are 20 somethings, but Lupo's voice has never sounded better. Il Tempio has finely crafted their debut release to embody the richness and ambiance of the 70s and marry it to modern music. There are 10 songs on this disc originally released by Black Widow Records and reissued on the South Korean label Si-Wan Records to coincide with their appearance in Seoul, Korea in October 2011. The music contains lots of organ, Mellotron, keyboards, stunning guitar riffs, energetic bass, percussion, and vocals that alternate with spirited rock, quiet interludes, and ballads. Some of the outstanding songs include the beautiful duet between Elisa's keyboards and Lupo, "La Stanza Nascosta," the eerie and magical "Danza Estoterica di Datura," and the magnificent "Faldistorum" with electric keyboards and organ that transition to the dissonant and majestic church organ. Il Tempio is gaining fans and is also appearing at 2012 NEARfest. If you love 70s Italian prog, then you should definitely invest in this disc. Highly recommended!

Tsunami - Anthem of the Great Wave – Tsunami are a Dutch five piece of guitar, keys, bass and drums and a very obnoxious lead vocalist who doubles on guitar. This guy is your typical quasi-emotional overbearing neo-clone nasal-whining...  (1994) » Read more