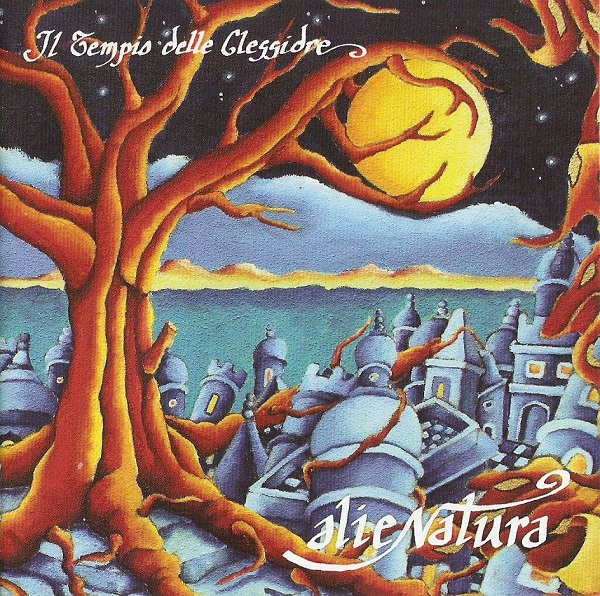 October 2013 saw the release of Il Tempio delle Clessidre’s long awaited second album alieNatura. Over the three years since their debut the band has gone through some changes. They continued to actively perform and in June 2012 they were on the bill at NEARfest performing Zarathustra. Soon after, lead vocalist Lupo left to join the reformed Museo Rosenbach, which caused them to search for a replacement. After many auditions, they asked Francesco Ciapica to join and their first performance with the new line up was on November 10, 2012 in Belgium to critical acclaim. Three years in the making, their sophomore effort alieNatura shows a band maturing. alieNatura is a much more accessible album than their debut. The strong 70s vibe continues to manifest itself in the music and the beautiful artwork, which is reminiscent of Locanda and Le Orme. Whereas their debut release was focused more on Eliza’s keyboards, alieNatura presents a balance between all band members where they all work together as a unit, Fabio and Eliza share in composing the music, resulting in a more contemplative album. Francesco is a wonderful addition to the band, his vocals are similar to Lupo’s, but not as strident. alieNatura opens with “Kaze,” who happens to be their largest fan in Japan, and this song is an East-meets-West instrumental and a wonderful way to kick off the new release. The second song “Senza colori” is Francesco’s debut along with some intricate guitar riffs by Giulio. Eliza’s keyboards are understated and greatly enhance the listening experience. Halfway through we get some rumbling synths, Mellotron washes, piano, and acoustic guitar. The song closes with Giulio and Eliza playing in unison. The third song, “Il Passo,” is one of the highlights as it harkens back to their debut release with greater use of organ and keyboards. Giulio’s soaring guitar solos are outstanding. This song goes through many tempo and melody changes that hold your interest throughout its nine minutes. Then there is a very tasteful analog synth solo that closes the song. The fourth song, “Fino alla vetta,” is a bit cinematic with its acoustic guitar and Mellotron opening. And this is the first song where I noticed Paolo’s drumming. “Onirica Possession” is a Gothic piece that contains a beautiful “flute” solo that turns sinister about the mid-point. There are barely discernible whispered voices and the song shifts to a danse macabre with Eliza contributing vocals for the first time. This is followed by the short three minute song “Notturna,” a quiet and ambient song with Eliza’s multi-tracked vocals, piano, and birds that reminded me somewhat of Opus Avantra. The album closes with “Il Cacciatore” that happens to be the best track on alieNatura and an intelligent way to close an excellent album. This 15 minute opus incorporates all of the elements that make Il Tempio one of the great new Italian Prog bands: Eliza’s Mellotron and keyboards, Fabio’s strong bass lines, Giulio’s acoustic and electric guitars, Paolo’s drums, and Francesco’s strong vocals. The song gently closes with wind chimes and synthetic wind bringing you full circle to the beginning of the disc. All in all an excellent second release by this young Italian band. Now we are awaiting the DVD release of their outstanding live performance in Seoul.